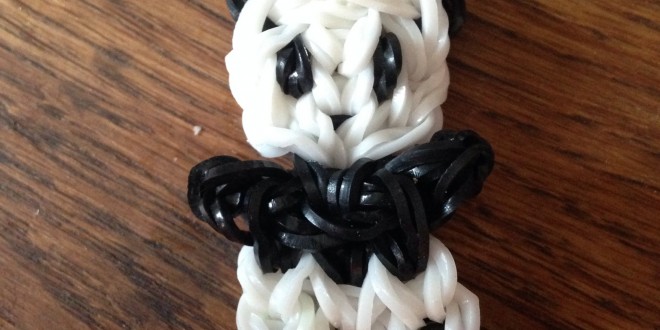 Are you taking part in the Blog Every Day In August challenge hosted by Outmumbered?? Today’s prompt is to capture a moment of your day and share it.

The weather has been awful. The kids have been awful. Hubby hasn’t been feeling 100%. So basically the mood of the household is pretty bad. During P2s nap I decided to sit and do a little bit of loom banding with P1… Well P1 got bored after a few minutes as she struggles to do it by herself so ended up just finding the colours for me. I originally started by trying to create a chick. That went horribly wrong. So seeing as the panda bear is sort of a tradition in our family I decided to make a panda. Expecting it to go horribly wrong as well. Well it didn’t and I’m so proud. I’m proud mainly because I’ve struggled to create a simple bracelet from loom bands!! I’m now half way through making a purple & white panda and then I’ll be making a green version. One for all the girls.

What have you been doing today?