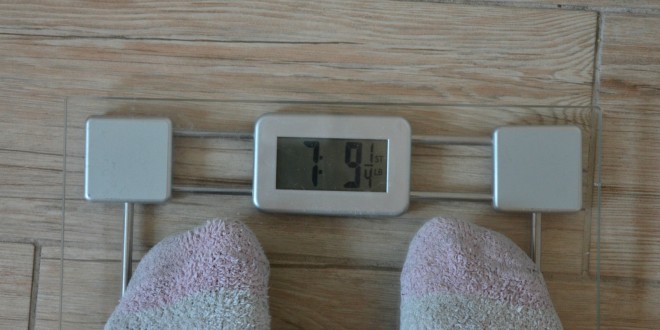 We had our six week check up today. I was asked whether my bleeding had stopped, which it has about two days ago, apparently it takes longer for a breastfeeding mother to finish the post-partum bleeding which I found quite interesting to know. I was asked how the feeding was going and how my breasts are, well I think my body has responded really well this time and has pretty much regulated from the beginning.

We then discussed contraception. I’ve felt really nervous about having to choose a contraception. I suffer from migraines, more specifically aura migraines and last year I was admitted to hospital after experiencing a hemiplegic migraine which is basically where your body imitates a stroke. Due to this I am restricted to the type of contraception I can have. The doctor advised that she could not prescribe any type of pill, which I knew, and discussed my other options. I’ve reluctantly opted to have the Mirena Coil. In an ideal world I’d like to be sterilised but they can’t consider this at my age.

Since birth I’ve been experiencing awful constipation which leaves me in tears. I discussed this with the doctor who asked if I was eating and drinking, which I am, so she’s put it down to a need to do more pelvic floor exercises as it’s quite common for new mums to experience constipation. I’ve also been prescribed a gentle laxative to help soften it all down there. Yuck! I’m also being sent for a blood test to check on my iron levels. Moving on to P3, we discussed her arrival and the recent hospital admittance. I was asked if she was feeding well again, and if I had any concerns. We talked about how much she cries. The doctor then measured her head which is still thankfully following the growth line. Her eyes were checked. Then she was weighed. P3 is now weighing 8lbs 7oz meaning she’s put on 7 ounces in two weeks. This has actually raised a slight concern as her weight is plotted at just below the 25th centile instead of just above it. For now, the doctor has said it may be because of her illness but it’s something that will be monitored. As a whole she is very pleased with P3s development.

I’ve come away really pleased with our six week check up. I think it was really thoroughly done and the doctor was so friendly and explained so much to me. But reaching six weeks means a lot more to me than just seeing a doctor. Obviously it’s not a written rule but I feel that now P3 is six weeks old I can no longer use the excuse of “I’ve just had a baby”. I’ve stopped bleeding so my body is returning to normal and I can finally wear normal clothes without feeling self concious… Only I do.

For the first time in my whole life, other than during pregnancy, I’m unhappy about my body. In fact I’m disgusted. I know I’m not exactly classed as obese and I’m certainly not after compliments. The current state of my body is something I’m not content with and is making me feel very down. I’m struggling to dress still, not because of a bump or maternity/sanitary pads but because of my flabby belly and my chunky legs. This isn’t me. I have gorgeous, large boobies to be showing off but I just can’t feel confident yet. I don’t even like getting naked in front of hubby anymore. Using the Daily Workouts App that I’ve had on my phone for such a long time, I’m determined to get slim and lose my baby-weight. I know I can’t diet yet as I’m breastfeeding but I can eat healthier and smaller portions. I’ve also ordered some new makeup and am hopefully getting my hair cut and coloured very soon. Maybe for Christmas I’ll receive some new clothes from Santa to boost my confidence a bit more and transform my “new look”.