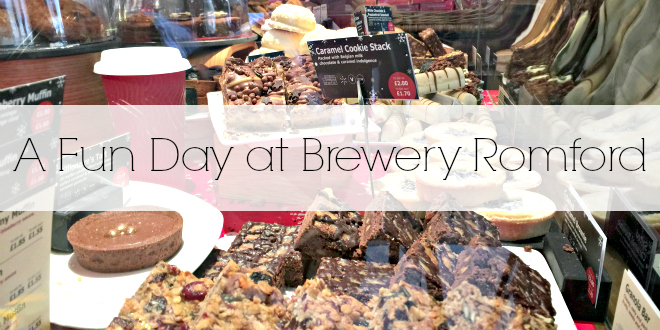 A Fun Day Out At The Brewery Romford

On Sunday we escaped the hustle and bustle of normal family life and dropped the girls in various directions. P1 had a party to attend so she went round to her best friends, and P2 & P3 went to my MiLs. We headed for a day date at The Brewery Romford. We’d been invited along to see what the shopping centre had to offer and enjoy some of the offerings. This isn’t a close by centre for us to go to, about 30 miles, but the journey was very easy and straight forward on main roads. Parking is free on a Sunday at The Brewery so that pleased us immediately as we arrived. It was clear to see the shops were located outside and were large stores. TK Maxx, 99p Store, GAP and even Home Sense are there amongst other big brands. They had some very random opening hours for a Sunday, with some opening at 10, other at half past and some at 11am. We had arrived just gone 10 which was an hour earlier than our cinema slot. That’s when the Costa caught our eye so we headed there to warm up. It has seriously turned absolutely freezing all of a sudden and I’d made an effort with my appearance so was very chilly. No pain no gain as they say. Hubby and I warmed up our hands around some Christmas themed hot chocolate then headed to the Vue cinema to collect our tickets.

We were seeing The Hunger Games: Mockingjay Part 2. We had to catch up with the previous two movies as we’d only actually seen the first one. I was hooked and really excited to see the final instalment. We stocked up on popcorn, which we’d nearly finished before the film even started, and a drink. The cinema was empty when we arrived. The silence was really creepy and you forget what it feels like when you have children. The film was absolutely amazing and exceeded my expectations. Afterwards we headed to Frankie & Benny’s to get a taster of their Christmas menu for this year. It’s always very odd when we dine without children. I feel like I should be doing something like pulling my baby off of the table she is climbing, or picking up the crayons that P2 has dropped. Instead I was able to sit in the company of my Hubby and chat. Hubby had chose a different starter than me, I had the Cheese & Bacon Skins and Hubby had Smoked Salmon Bruschetta. We both polished our plates off. I have a real soft spot for potato skins. The staff were amazingly friendly and accommodating, we had such a lovely time chatting to the manager and waitor. I was quite upset when I saw there was a Toby Carvery and felt cheated of a roast. So the Frankie’s Festive Dinner was the obvious choice for us at Frankie & Benny’s. It was delicious and the red wine gravy was the best gravy I’ve ever tasted. Although we did have a decent wait between courses I couldn’t manage to finish my mains or my dessert, which was the Chocolate Yule Log served with a mint ice cream. After coming out of the restaurant feeling completely stuffed to the brim it was like we were in a different shopping centre to the morning. When we first arrived there was barely a soul in sight, but at around 3pm it was busy! We nipped into a few shops for a wander and then headed home. I’d unfortunately missed the Baby Shower I was due to be at that afternoon but being with Hubby and zero children felt absolutely awesome.

The Brewery Romford is a lovely venue perfect for a day date or even evening date. I can also see myself having a Costa with some girly friends if only it were a little closer to our home. I want to return and go back to home sense!