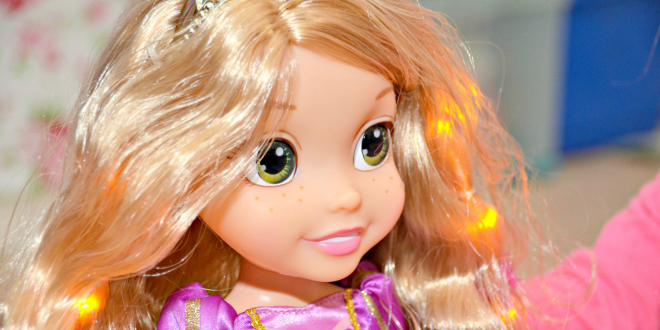 The Disney film Tangled holds a special place in my heart. One of the first things my Hubby ever said to me was that he had been told he looked like Flynn Rider and then P1 began to say that he looked like Flynn. It was funny little joke between us and so when we were offered to review the Hair Glow Rapunzel I just couldn’t say no. I’m going to own up now though, we’ve actually put it back in the box and wrapped it up for P1s birthday on Christmas Eve so it was P3 who was doing the testing this time. When you brush her hair it magically glows and she sings “I See The Light” from the film. She also sings and glows when you press her chest. She’s such a sweet doll and the girls are getting a lovely little collection as they had the Cinderella doll recently too. These dolls are so high in quality and just so cute!!