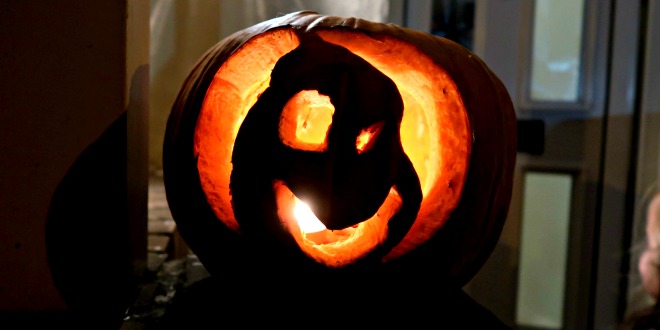 Last year P1 went with my MiL for a Halloween party and missed trick or treating. She was devastated and this year she kept asking if she could come with us. With nothing else planned for Halloween day and evening, we agreed to go trick or treating.

Hubby bought a super cute small pumpkin to carve. He spent ages marking out the cat face with P2, spooning out the insides and then P2 spent a long time drawing shapes on it too. She was so proud of her creation. I’d decided to make a little “we are out, help yourself” sign so we didn’t get lots of knocking.

P1 spent the entire day getting very excited about what costumes her sisters and herself were going to wear. We didn’t really have time to buy anything elaborate so she made do with a previous year’s witch dress for herself, dressed P2 up in black clothes and found some cat ears and then got P3 dressed up as a bumble bee.

We have a road right by us that always seems to get in the spirit of Halloween and Christmas. There’s usually plenty of well decorated homes and we have the rule that we only knock on those that are decorated or that have a pumpkin sitting outside.

It was such a simple evening but the girls all had so much fun knocking, shouting trick or treat and then saying thank you and happy Halloween. It was fun and the girls ended up with a nice little amount of treats in their buckets. Our own little bowl of sweets was also rapidly disappearing. That night, I got woken up by a rather upset husband who told me that a bunch of teenagers had smashed up our pumpkin and it was splattered across the road with the candle inside smashed too. After checking out Facebook, it turns out that there was a bunch of teens running riot and smashing up pumpkins and throwing eggs at houses.

It baffles me that anyone would have such little respect. But it actually made me really sad to have to lie to P2 about the pumpkin she was so proud of. She thinks a fox came along and had her little pumpkin for dinner because it was so beautiful. But really, a bunch of hooligans with no respect for others came along and destroyed it.

I will never understand.