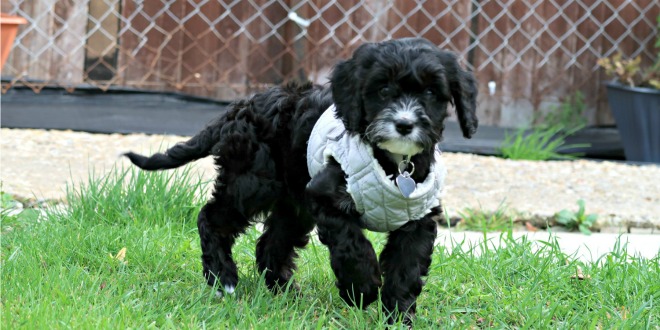 If you follow me on Instagram or Facebook then you’ll already know about our little surprise. I insta-storied the day as it panned out you see. I was far too excited.

I’ll try to keep my excitement at bay for this blog post. Basically my Mum is a crazy animal person. She was a veterinary nursery for the majority of my childhood and we actually lived attached to a vets for some time. I loved it and I grew a passion for animals just like my Mum.

Recently my Mum has wanted to get a puppy. Eventually my Step-Dad agreed that if she could find a black and white Cavapoo puppy then they could get one. I think he assumed they only come in the tan, light brown colours as that’s what comes up when you Google it. He also wanted to name her as they feared they’d end up with another Rainbow-Sparkles situation if it was left to the girls (that’s one of their guides-pigs)

Of course my Mum found one. Went to view, secured her with a deposit and waited. She really wanted to film my girls reactions so we decided to keep the entire thing a secret. That was the hardest thing to do when I was equally excited and it wasn’t even my dog!

On Friday it was time for the reveal. Little Millie, who was nearly named Myrtle by my step-dad, was ready to be collected at just 8 weeks old. It was a long day for her on Friday. My Mum and Step-Dad collected her early, then my Mum brought her straight to our house.

We had quite a few ideas for surprising the girls but the main fear was that P2, who is desperate for her own dog, would think it was for her. So the surprise part had to be carefully thought out. We thought about having my Mum FaceTime then suddenly appearing at our front door. Popping a box at the front door. Going on the school run with the puppy.

As I said my Mum came straight from the breeder to our house with Millie. She arrived just a few moments before we needed to leave to collect P3 from preschool. Millie was much smaller than I’d imagined her to be, the cutest little bundle. She instantly took a shine to our cats, who were less than impressed of course. I then bundled myself with Millie into my Mum’s car to get P3.

P3 isn’t great with surprises or anything where there’s focus on her so I was a bit nervous. I cuddled Millie into my coat to keep her warm and headed in to pick P3 up. She hadn’t noticed at first. P3’s initial reaction was so funny, she sort of frowned then smiled once my Mum explained it was for Grandad. She then would not stop stroking her.

We had to pop to the pet shop to buy Millie a new harness, collar and lead as the one my Mum had originally got was far too big and literally just fell off of her. P3 was so proud of Millie. She wouldn’t let her out of her sight when the staff at the pet shop was fitting her with her collar. She wanted to carry her. My heart was just about ready to burst.

We got home with P3 and Millie in tow. I managed to film some lovely clips of them playing together. Millie really took to P3 and followed her everywhere. They had a good few hours together before it was time to pick up the other two girls from school.

This was the next and very scary part of our surprise. Picking P2 up and P1. As they didn’t know Nanny was coming over, the initial surprise was having her there in the first place. Then my Mum explained that she’d come over to show them Grandad’s present to see what they thought. They definitely were not bothered.

I filmed their reactions in the video below but thankfully Millie had woken from a nap and was outside playing with P3 in the garden. So we casually entered with the girls and then went straight into the garden. P2 was very surprised shouting “puppy” as she ran down the garden.

It was obviously love at first sight. My Mum took all three girls and puppy back to Essex with her for a sleepover. I have been inundated with photos and videos of them with the puppy. It’s adorable. I know that Millie has already become a very loved member of their family. I’ve obviously put my name down to be 1st on the list for any dogsitting duties.

Last thing for me to do is leave you with the video and of course all of the cute puppy photos. Enjoy!!