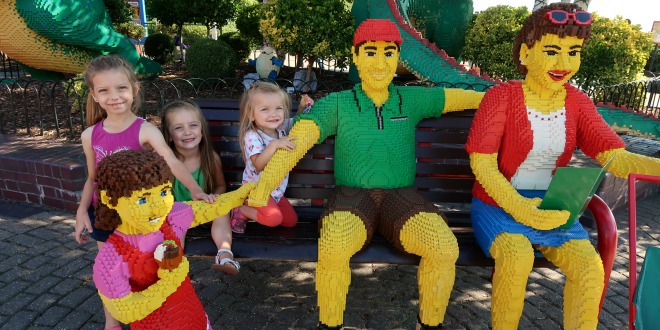 A Surprise Trip To LEGOLAND Windsor

Surprises in our family either go down really well or really badly. P1 struggles with the unexpected sometimes but I decided to keep a little surprise to kick start our summer holidays. Hubby booked an Airbnb just up the road from LEGOLAND Windsor. Our family seems to have a theme park bug at the moment and we can’t get enough of them and from past experience, I knew that LEGOLAND would be a great option for all of us to go to. The girls quite liked the surprise, you can see there reaction in my video here, and it was really funny when they just looked back at us like we were crazy. They had no idea what LEGOLAND was. We had a lovely evening at the Airbnb and then we headed to LEGOLAND for opening time. P2 loved the little photos on the tickets especially the unicorn one. The staff got everybody excited with a countdown to walk through the gates. Although they let you in to the park at 9:30am the rides don’t actually open until 10am. You are able to wander around The Beginning, Star Wars and the Miniland. They even had a fun little opening show in the Miniland with dressed up LEGO characters. The weather was already so warm and sunny which made the wait much easier. We had planned to head straight to Atlantis for our first ride before things got super busy. I actually love the Atlantis ride. You get to go in a submarine and be with all the fish and sharks. Of course there’s LEGO statues under the water too and for a first ride, the girls were pretty happy. We then moved on to exploring LEGO City and queuing for the Coastguard HQ. The queue was already really long but there’s plenty to do during the wait. Hubby took P2 and P3 on one boat and I had P1. P1s steering was hilarious, we crashed continuously and we got squirted with the giant LEGO elephant. We then ventured to the Fairytale Brook ride which is a lazy river type ride that takes you through lots of LEGO fairytale characters. Hubby had P3 this time and he is absolutely rubbish at naming the different fairytales. We then caught the end of the Heartlake City show with the LEGO Friends girls. It was super upbeat and a really great addition to the day. We then wandered round to the Heartlake City Express. The girls had started to make hunger noises and we hadn’t taken any food with us so we needed to find a place to eat. After getting shockingly wet on the Heartlake City Express, we headed round to take a more gently ride on the carousel. P3 loved it and she was allowed actually on the horses that moved up and down. We have been to places where she hasn’t been allowed.

We took a look at many different food places and we were honestly shocked at the prices. There’s an all you can eat buffet in Heartlake City but the prices are quite high, especially for a family and there isn’t an option to just buy a pizza to share for example. The cafe only sold snack items and sandwiches but the girls aren’t really that into things like that and we wanted them to fill up as much as possible. So we headed to Farmer Joe’s Chicken Company in DUPLO Valley. Again the food was incredibly expensive. A children’s meal cost nearly £6 for just one piece of chicken. To feed all of us for a meal each, we would be paying over £50. You sort of expect to pay more when you go to an attraction but the cost was pretty high compared to other theme parks we’ve been to. When you put food cost on top of the ticket entry price, going to LEGOLAND is a really expensive day out for a family. On an upside, the food was really nice and I loved the decor inside the restaurant. After lunch we ended up splitting up slightly. I spent time with two of the girls in the DUPLO Valley playground whilst Hubby took one of them on a few rides that P3 wasn’t old enough for. We then headed for The Land Of The Vikings and Hubby took P1 and P2 on the Viking River Splash, twice! P3 enjoyed watching them but it was such a shame that the water canons were not working. P1 and P2 then forced me on the Spinning Spider ride, a ride that I remember making me feel so ill when I was little but we had a really good time. We then went into the NEXO Knights Kingdom and P2 was super brave to do the two rollercoasters. The other two really enjoyed watching the coaster go down and hearing the people screaming. It was so much fun. I actually really enjoyed the bonding time I had with P1 and P3. It’s rare that they get to spend any time together because of school commitments. Whilst we were waiting we went into the more grown up playground, Castaway Camp, and had a little play. Everything was so hot and definitely too big for P3 and she was getting grumpy too. Whilst P3 had a nap we ventured on some of the Kingdom Of Pharaohs rides. P1 and P2 had been desperate to go on the Laser Raiders. It was sort of nice to have some peace and stop, we’d been on the move the entire day. After P3s little nap we decided it was time to go in the DUPLO Valley Splash Safari. I had remembered to take their swim costumes and towels. I actually loved the way the girls got right into the water and embraced the cold. It was so much fun! P2 took a driving lesson and she was so good. She was really mindful of the other children and was steering brilliantly. I remember P1 doing it when she was about P2s age and she crashed into absolutely everything. Hubby then took the older two for another Laser Raiders and I took P3 to the Heartlake City Lake to watch the Pirate show. She was absolutely memorised by it and I really enjoyed watching the daring tricks. The last ride of the day was another go on the Viking River Splash as we made our way up the hill. I think we covered nearly all of the rides at LEGOLAND and the girls were none stop the entire day. We all laughed and smiled. It was a really good way to kick start our summer holidays. I filmed our brilliant day out which can be viewed below. Apart from the extortionate prices of food and drink, LEGOLAND is a brilliant day out for all ages because there are plenty for the youngest children to go on and also for adults too.

Disclosure: This is a collaborative post.
Share
Previous Life Is Changing
Next Fun On The Beach At Bluewater