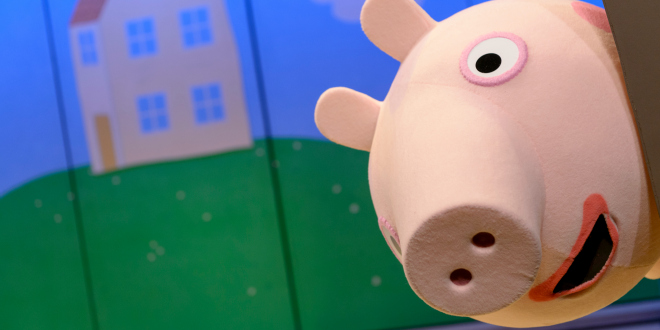 I have had nearly 7 years of Peppa Pig in my life. It was P1 who first became obsessed and watched every episode over and over to the point where I probably knew the words to every season! I treated her to theatre trips too which were thoroughly enjoyable for me as well as her with the cute hand puppet Peppa, George and friends.

Now it’s P2s obsession. She’s been able to watch the same episodes over and over, wear her big sisters Peppa tops and leggings, have Peppa duvet covers and cuddly toys, and of course visit Peppa Pig World. Today we introduced her to the world of Peppa Pig theatre. Only it was a completely surprise, which seemed quite appropriate seeing as it was Peppa Pig’s Surprise Live Show. I was really shocked at how well behaved both children were as we travelled on the train towards Duke Of York’s Theatre in London. P2 seems to have really grown up lately and she sat happily eating mini cheddars and joking at each stop that we needed to get off. We’d decided to go during school hours with just P2 and P3 as a pre-Christmas treat as we plan to take P1 out just us and her for her birthday next week.

I hadn’t realised quite how close the theatre was to London Charing Cross so we were rather early. We killed the time by having a McDonald’s snack wrap each. On arrival at the theatre we were greeted by flashing toys and staff handing out the souvenir brochures. Not once did P2 ask for anything which I was so stunned about. We were given our tickets smoothly and shown where to put our buggy. After dropping our coats and buggy off, we popped into the bar area and had a soft drink each whilst the kids did some drawing with the paper and pens provided. Then headed to our seats. We had front row of the Royal Circle, my Nan always bought those tickets when we saw pantomime as a child, the theatre was a classic old fashioned one. A huge chandelier and beautiful architecture.

P3 was a little stroppy at this point as she only had a 5 minute nap whilst waiting for the train but as soon as the Peppa music started and the leading actress, Daisy, came on she was captivated. P2s face was in awe. It always makes me so emotional when I see my daughters so content, they are so vulnerable at that age aren’t they?! The Peppa Pig Live Tour have had a bit of a facelift since P1s theatre days. They are no longer hand puppets and are rather large characters now. See photos. The whole performance is so engaging for the children and adults, with tons music and interactive parts like the smoke, bubbles and as we were at the Christmas Special there was even snow falling from the ceiling at the end. It was just such a wonderful show that I’d highly recommend you go and see. Peppa Pig’s Surprise Live Show is touring across the UK now and into 2016. Our journey home was even more straight forward as P3 slept the entire time until we were home and P2 enjoyed playing with the flashing toy that she managed to persuade Daddy to get after the show.