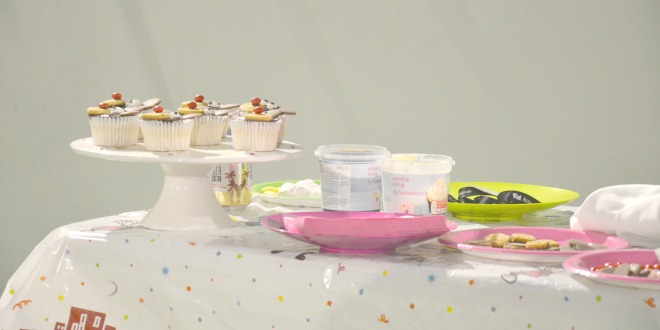 Going anywhere as a family of 5 is really scary. I have to check, double check and then debate the journey first because quite frankly trains can get pretty stressful when you are outnumbered by children and in confined conditions. But when I was contacted to attend the launch of Annabel Karmel’s new Family Cooking App I just had to attend!

We very nearly didn’t make the event as P2 was quite poorly on Friday, she still wasn’t herself on Saturday but we all agreed we just couldn’t miss the event and considering she’d eaten more than the previous day we figured she’d be ok topped up on Calpol. Our journey was quite simple really, our mainline train and then a taxi to the venue which was KidZania. P1 was extremely excited. I personally was just super excited to meet Annabel herself as I had a book signed by her six years ago when P1 was born. The Family Cooking App was launched at KidZania London in Westfield Shopping Centre. I’d never been to Westfield before and was completely amazed at the size of it, there was me previously thinking Bluewater was huge! Arriving at KidZania London was like entering an airport. It was set out identical which was so amazingly different and exciting. P1 was so ecstatic but P2 was grumpy from feeling poorly.

We “checked in” to the KidZania City and we were all issued with security wristbands (including the baby) then shown our way into the village to attend the Annabel Karmel event. It was held in the Football Stadium. We were welcomed by the warm PR team of Annabel Karmel at which point I got to actually meet Annabel. She’s short like me and so kind.

Annabel Karmel has launched her newest app called Family Cooking. I can honestly sit here and say that it is the best, most stunningly visual cooking app I have ever downloaded. There are meals set in different categories; Every day Meals, Light Meals, Snacks & Lunchboxes, Quick & Easy, Prepare Ahead, Sweets, Weekend Get Together and Kids Cooking. There are over 120 recipes to choose from, each with clear instructions, the ability to add the meal to your custom made in-app meal planner or add the ingredients to a shopping list.

Using the Kids Cooking part of the app, children aged 4 and above are able to learn how to cook and complete 12 recipes, collecting “badges” as they go. Firstly they pick which recipe they want to make (obviously at this point you’d need to source ingredients), they then virtually make the recipe by dragging and following on-screen instructions. It then guides your child step by step as they make the recipe for real. Creating budding little cooks.

Annabel spoke about her new app, her inspiration behind it and her determination to help children learn and thrive. Using her app she guided us all through decorating some cupcakes. As you can see from the photos, P2 tucked in to all the sweeties before the demonstration had begun. P1 really enjoyed making and eating the cupcakes.

We were then given some cold lunch of sausage rolls, pizza, raw veg and other scrumptious tasties which was very welcome to my belly and even P2 managed some food. P3 loved the breadsticks. The kids were then given goodie bags each which contained the Annabel’s Kitchen My First Cookbook inside, a tray with cookie cutters and some KidZania goodies. The kids were thrilled and we’ll be baking some cookies this week.

We were then able to enter KidZania. I was literally jumping off the walls weeks previous to this day as the idea of a mini city built for children to explore and learn was just awesome. The KidZania London is only very recently been opened however it is a worldwide organisation. As we entered one thing that stood out to me was how dark the entire city was. I’m not sure if they were trying to give off a night time feel or what but it was quite depressing I have to say.

The idea of KidZania is that the children get to experience real life jobs under the supervision of trained adults. Things like setting up a bank account, being a firefighter, post man or working in a factory. There were even places to learn about recycling and electricity. On “check in” the kids are given KidZos, or fake money, that they can use to spend on things or earn by working. P1 took a little while to get into things. Most likely because anything she wanted to do, we had to wait 5-15 minutes for it to be free. I tried to get her to do the Special Care Baby Unit as it was free but she was so shy and didn’t want to take part, so we ventured round the corner to the Beauty Salon where she started to really enjoy herself. She also made a bracelet using her KidZos, learnt how to make bubbles in the science lab, made mini-milk ice lollies and Cadbury chocolate.

I didn’t like the waiting around or the high KidZos prices on some things when they were getting very little back from the jobs they were doing to get a salary but I suppose that does reflect real life!

P2 just wanted cuddles the whole day and had a brief nap whilst  P3 was really good most of it and slept for a while after the Annabel Karmel event. When they both woke up we decided to explore the activities suitable for 0-3 years. With some confusion with the wristband on P2 and a near argument, we were allowed into the little house which was designed to be just like a real home but toddler friendly. P2 loved it. It was so colourful and bright compared to the rest of KidZania. Having all 3 kids by ourselves is so tiring especially when one is poorly but we did manage to enjoy the day the best we could. P1 requested to see Trafalgar Square on the way home although we felt very intimidated by the religious crowd there so our stop was quite brief.

I’ve created a little video of our day which I hope you’ll enjoy. Like I’ve said, the lightening was quite awful in KidZania so sorry for the quality! Don’t forget to download your own Annabel Karmel Family Cooking app as it’s simply brilliant and not just for children.