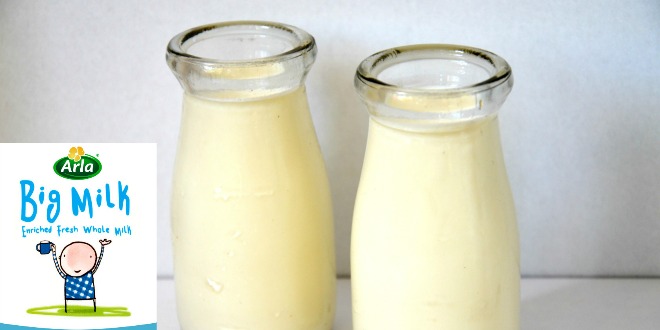 Milk seems to be the bane of my life at the moment. I seem to spend so much time making formula milk for P3 and receiving demand after demand for “a big one milk bottle” from P2. Then there’s P1 who really should be having more for her bone strength and growth.

P2 is addicted to cows milk in a bottle. In the past she’s been known to have well over 5-6 full 9oz bottles a day which is dangerously unhealthy for a child of her age. We’ve manage to cut it down to one small 5oz bottle in the morning and 9oz at night on a really good day but another 9oz sometimes sneaks it’s way in if she has a nap or is particularly emotional. When I was invited to the launch of a new, one of a kind, milk the excitement was huge. Was this the answers to all my worries? Would I not feel so guilty about the amount of milk P2 was drinking? Unfortunately I couldn’t make the event but was asked to review the milk anyway which I was glad about.

The department of health recommends that children move on to cows milk from the age of one and supplement their diet with vitamin A, D and iron. Arla has created Big Milk especially for children aged 1-5 years. Fresh Cows milk fortified with Vitamin A, D and iron creating the perfect solution for parents in one drink.

The Arla Big Milk cost £2.25 for 2 litres which when you compare to supermarket own at about a £1 for the same amount it is rather expensive. But you have to remember the Arla Big Milk contains so much more than just calcium.

I decided to pour some Arla Big Milk into our mini milk jar glasses I bought before Christmas. I hoped P2 would drink it this way rather than from a bottle and she did. According to P2 it is “yummy” so that’s certainly the deal of approval from the milk addict. P1 is 6 years old, so slightly over the recommended age that Arla Big Milk was created for but with her growth issues and hypermobility I was certainly content with P1 having a drink or two or three. I’ve even been using the Arla Big Milk in their morning porridge as knowing that they are getting extra goodness from their breakfast is such a huge boost.

P2 has been drinking less milk lately which is great for us but will still have it in her bottle. I no longer feel guilty about her drinking so much milk though because the Arla Big Milk has all the added vitamins that are helping her grow and develop. We have even bought a few bottles ourselves which is saying something as we rarely buy a branded product when it costs more than non-brand. A perfect solution for getting vitamins into your child's diet.

User Rating: 2.27 ( 58 votes)
Share
Previous A Day Out with Three Mobile & A Samsung Galaxy S6 Review
Next “Her face was tear stained and she held my hand tightly”