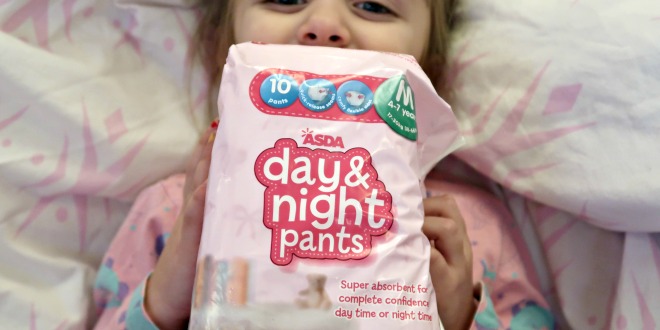 The saying that every child is different, most definitely runs accurate in my house. We have three girls and each one of them is extremely different. Not only personality wise but with their developmental milestones too. P1 was very different, she was hitting things late due to her being premature and so things like crawling, walking and even toilet training came much later. With P2 I wasn’t in a rush to toilet train until the month before her second birthday when she sprung it upon us. That was two years ago now which seems absolutely absurd to say out loud. Initially she was dry within a few weeks, even at night time we very rarely had accidents. With P1 I kept her in night time nappies for ages after being toilet trained despite the fact she never actually wet in them. But P2 refused to put one on. Then randomly she started wetting the bed and regressed to wearing nappies at night again.

Part of me felt like we were taking a ginormous step backwards as she was over three years old. She’d been dry for a year and we very rarely had accidents day or night. I still to this day have absolutely no idea what caused her to start wetting the bed again, but I do know that this is normal. P2 was and is, still in the potty training stage so at this point I shouldn’t have any concerns for her. But I did want to support her as much as possible. Thankfully ASDA Little Angels have new Day & Night Pants for older children aged four to twelve years of age. We were sent the Medium sized pant which is suitable for ages four to seven years and comes in a pack of ten nappies. There are boy packs and girl packs so that they give the best fit for your child. Initially I loved that they didn’t have characters on them instead they had a cute pink bow print across the front and back. This gave them a more grown up feel in my opinion.

If I’m honest, they feel like cheap nappies that you can buy however, they do not perform like cheap nappies. The Day & Night Pants are super absorbent and have easy release seams which allowed P2 to be more independent when taking them on and off. They are obviously pull up style just like knickers would be. P2 was really excited as she’d been borrowing her younger sister’s nappies to prevent night time accidents. She reported them to be very comfortable to wear. Over the course of time that we were using them, so ten days to be precise, I saw a huge improvement with P2s bed wetting. In fact when we finished the packet and I asked her whether she wanted me to buy some more, her response was no because she didn’t need them anymore. She had been dry in her ASDA Little Angels Day & Night Pants for the later end of the ten days we were using them. I am pretty proud of her. I am not sure we’ve seen the back of wearing night time pants but I do believe she is finally heading in the right direction. It always seems to be that ASDA Little Angels really help my girls and it’s definitely a brand we can truly trust.

The ASDA Little Angels Day & Night Pants costs £3.87 which works at 38p (ish) per pant. It’s not a very cost effective option compared to standard nappies, however they are still cheaper than similar product brands.

This are perfect for boosting confidence in your child who may wet the bed. Super absorbent and very flexible.

User Rating: 3.95 ( 3 votes)
Share
Previous Going To The Library
Next A Country Walk At Lullingstone