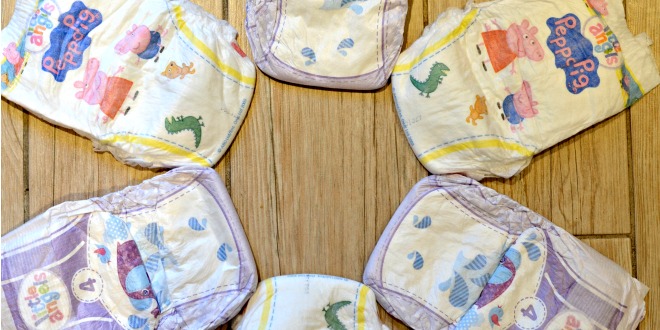 I have a thing for nappies. I’d like to think I’ve settled a bit after 7 years of parenting, but that thing is still there. It’s a little OCD like actually and can be quite embarrassing. I tell myself I’m like it because I want to make sure my girls are most comfortable but I’m not entirely true that’s the real reason.

Nappies have to be done a certain way, a certain height up the tummy and God forbid if the nappy sags. That’s just the worst thing ever isn’t it?! A saggy nappy. Some nappies just do it because they do it even when not wet. Others can get wet very easily and dangle between their legs. I can’t stand it and it even irritates me when I see other children like it. To be honest I’ve been known to change P3s bottom much more than it needs to purely because it is saggy.

So for me, finding the perfect nappy is critical. It has to tick the sag box and of course the absorbency box. They are the two main things that will make me return to a brand. If I’m honest, up until recently any nappy I used whether it was a big brand name or the cheapest own brand value would leak at night. A nappy for me mustn’t leak at night because there’s nothing worse than having to disturb your baby in the night and risk being up for a good few hours because of it. After attending the Dorchester Spa with ASDA Little Angels, I was given a few packets of nappies to try out for myself. Which is always useful when you’re told that they are all singing all dancing isn’t it?! And I didn’t waste time putting them to the test. P3 had a full night in the Little Angels Supreme Protection nappy which I was told that this is the King of the Little Angels range of nappies.

The Supreme Protection nappy is a tabbed nappy and is their softness, most absorbent nappy in their range. It has a super stretchy waistband and sides making it perfect for both day and night. P3 tends to be in bed for around 12 hours each night so the up to 12 hour of dryness was definitely something I was interested in. Every morning she used to wake up absolutely drenched from a leaky nappy. Well I am pleased to report that the ASDA Little Angels Supreme Protection has not failed us yet. We now use these every single night and trust them.

What about the day time I hear you asking? We have been using the brand new Little Angels First Pants. These nappies are so soft and are just like pants that you pull up and down. They were designed for those early days of potty training to help teach them the pulling up and down action. However, these are amazing in performance and can be used as a normal nappy from 12 months. When figuring out if they tick all the boxes I had to add the design to it because quite frankly anything with Peppa Pig should get a tick. These First Pants are so brilliant. When wet the liquid distributes really evenly up the front and back which helps to prevent the sag which drives me crazy. In warmer weather I have always hated my girls not wearing popper vests to keep the nappy from falling down, well I don’t have to worry about these anymore. The really cute Peppa Pig design on the front and back has actually made me want to show off her nappy. Especially as it doesn’t embarrassingly sag at all. I have felt like I need to change her more often recently as they puff up quite quickly but P3 is quite a heavy wetter and is drinking more too. The photo above was just before I needed to change her to give you an example, this is just a wet nappy after about 3 hours of wear.

I didn’t think I’d have much to say about a few nappies but I have been genuinely so surprised by a supermarket brand. If you have an ASDA nearby or can order online, please do because they are a real game changer when it comes to baby bottoms!

A trustworthy nappy. Super absorbent and such a cute design. Great value for money too.