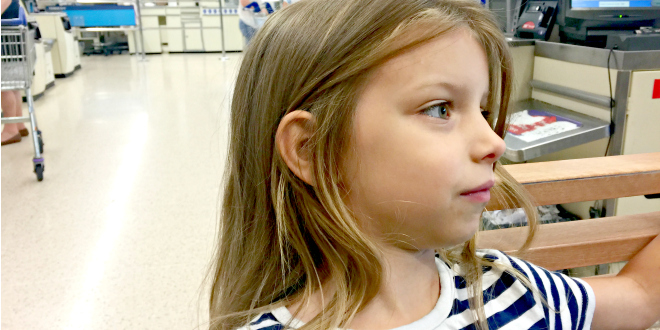 It’s very rare that P1 comes to a supermarket because we tend to do our food shopping during the week when she is at school. Now that it’s the school holidays I am seeing a new wall that P1 has to knock down or hide behind.

I watched a short little clip on Facebook about disabilities not always being obvious. It showed a boy in distress pulling things off the shelf. Now that’s been playing on my mind a bit because although P1 doesn’t trash the supermarket, she has been acting rather odd as soon as we step foot.

P1 holds her arms up and short of flaps them, she makes strange noises and skips about. If I didn’t know her, I’d think she was a little bit strange. We have to constantly remind her to calm down. She gets in people’s way and seems to pull a blind fold over her eyes because she’s totally unaware of the things around her.

She never outwardly tells me when she’s feeling uneasy though. I don’t think she understands her own emotions or why she does the things she does. I think I worry about her behaviour even more because P2 is starting to copy, and so is P3. I need to find a way of explaining to them about their big sister but I just don’t know how.

From a sad Mummy x