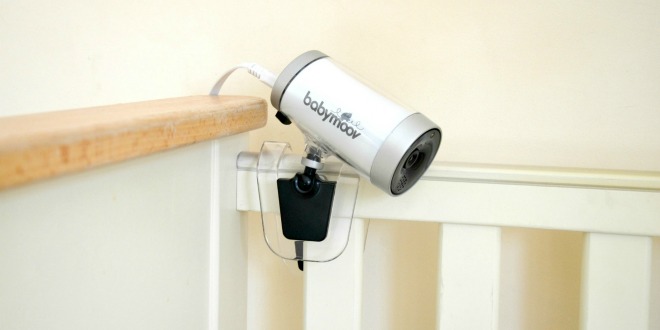 Have you ever wondered what happens when you walk out of the bedroom? What does your baby or child do? Well as part of being a Babymoov Ambassador this year I have been sent the new Babycamera 0% Emission and it’s given me the opportunity to spy on P3 at bedtime. The long term side effects on a baby’s brain that is subjected to microwave radiation in still unknown but what the scientists say is that your brain isn’t fully developed until the age of 20. Up until two years ago my skull was much thinner which basically means it can easily absorb radiowaves. I’m no scientist, I found that out from Mr Google, but it’s clear that the whole radiowave thing is potentially a pretty scary situation.

Babymoov have created a Babycamera 0% Emission to ensure the amount of radiowaves in your baby’s bedroom is as low as possible keeping your baby risk free. The Babycamera 0% Emission is connected through a wire. I was a little bit nervous initially as I had visions of P3 grabbing the camera and getting wrapped up in the wires but the mount is really secure and in all honesty I don’t think P3 has even noticed it there. When we were first testing the app it was a little disappointing but I addressed our issues with Babymoov and an app was released the next day. Although it still doesn’t support the newest iPhone 6/6+ as the screen resolution is zoomed rather than sized to fit which is a little annoying for an expensive camera but I’m sure that’ll be fixed swiftly too.

Remotely from your phone you can play music, turn the light on and off as well as change colour of it, speak to your child, capture photo and a 5 minute video however the video doesn’t record sound and you have to stay on the app whilst recording. I would definitely love to see a babycamera that has the capability to record all night. I would love to see her sleep patterns and the tossing and turning. I also really want to see P1 and P2 so I’ll be recording some of their bedtime moments too in the next few weeks. I created a little video of what happens at our bedtime with P3. Since learning to sit herself back up and to crawl she has been a little monster at bedtime.

The Babycamera 0% Emission costs £149.99. Certainly on the top end of the budget. A very effective way to keep an eye on your baby when they sleep. Safe and 0 emissions.