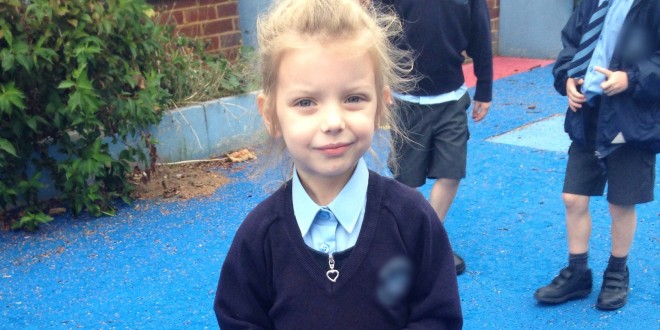 The summer holidays are now over. P1 has had two days back at school and she’s now in Year 1! It’s all new in Year 1. She has a new-ish uniform and they now get dropped off on the playground, learning is still play based but a lot more structured. In Year 1 she is expected to take her P.E kit to school and undress/dress herself for P.E. She did this at her previous school but it was a smaller class there and they had a lot of help, this year it’s all about independence.

I’d typically left getting her uniform late. We bought her new blouses (£4 for three) and her new pinafores (£8 for 2) from Sainsburys the week before. Thankfully she hadn’t grown out of her logo jumpers etc and all her P.E kit still fits. Her school shoes were bought just before the school holidays and fit her still but we purchased her new school trainers from Clarks the day before she started school!! I did get her P.E kit ready the night before but evenings are not really my thing anymore. I’m tired and achy. So I decided to do the rest of the organising on the morning that she started, including labelling of shoes and uniform, glue stick and ticking off which foods she will have this term. I woke up on Thursday with plenty of time. A set amount for each task. I stuck to it, P1 had other ideas.

She dawdled over breakfast, a normal occurrence but an annoying one for a school morning. She then kept ignoring me when I asked her what food she wanted – there’s four choices for each day, for 8 weeks, it took forever! Then she did her blouse buttons up wrong twice. Then she complained that her socks were uncomfy. She even tried to get away with moaning about her shoes, shoes she puts on every day normally with little fuss. All the time I managed to maintain my frustration and get us all out of the door by 8:30. P1 cried. On two separate occasions. One on the way to the office about missing her teddies. Then as she got onto the playground where she said she was going to miss me. I felt guilty that I was looking forward to having a bit of time out at that point. I was also hot and sweaty from carrying P2 and dragging P1 round the whole of the outside of the school building. I bet I was a right picture.

But she had a good day! And her second day, today, went smoothly from the moment she woke to the end of school. It is nice to have her back now. Her behaviour at home still has something to be desired but I’m so proud of her and the things she’s achieved in her lifetime.