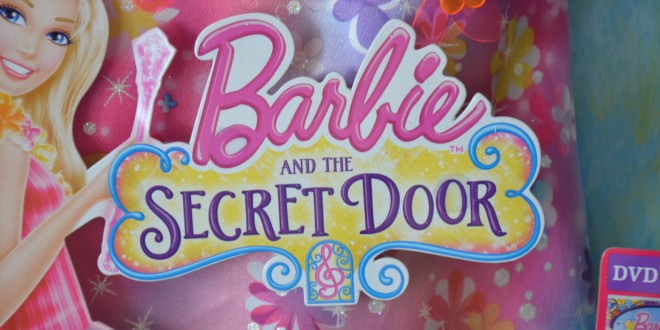 Hubby has been blessed with a house full of girls – pink, princess, teddies, dresses and Barbie. On the 1st September 2014, Barbie releases her latest film to DVD, Barbie and The Secret Door. P1 is up to date with all 27 of the films that have been created since 2001 so she’s rather excited for the new film release. Barbie and The Secret Door sees Barbie stars as shy Princess Alexa who discovers a new fairy-take world. She teams up with two new magical friends to save the Kingdom. I have no doubt that this film will capture both my girls imaginations just like all their previous films.

We’ve had the pleasure of introducing Barbie as Alexa into our collection of Barbies. Initially, Alexa looks just like any other Barbie doll. She’s slim, blonde and very pretty. Her dress is brightly coloured and it has a detachable skirt. Alexa wears a tiara and is holding a “magical” wand. Her arms moves which plays two different tunes from the movie and initiates the lights on her dress to flash.

P1 has really enjoyed playing with Barbie Alexa. She’s a very imaginative little girl when she plays and Alexa helps to bring that out in her play. P1 is also extremely excited about the movie being released.

A lovely little girls toy to brighten the child's imagination.

User Rating: Be the first one !
Share
Previous Fisher-Price Discover Your Way
Next 14/31: Why Do You Blog?