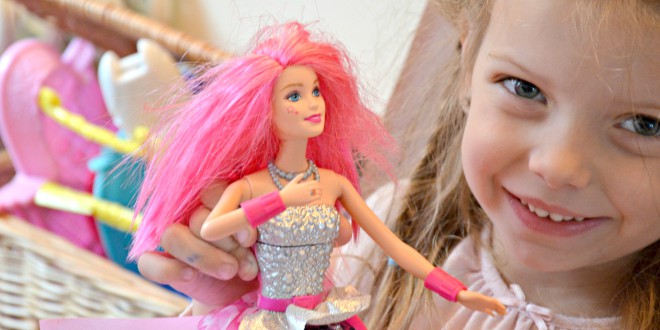 Barbie has been around my whole entire life and they have certainly come a long way since then too. P1 has a huge collection of various Barbie’s who are mostly naked with scraggly hair now. The technology side of things has also improved and P1 especially loves watching all the fantastic movies that come out. The latest one is the Barbie Rock ‘n Royals and we were sent a Rock ‘n Royals Doll to compliment the movie. Barbie plays Courtney, a princess, and her world collides when there’s a mix up with a rock star and they are both sent to the wrong camps. Both girls embrace their differences! As always they have not failed us with this movie and it’s a super cute storyline perfect for a girly night in. The Courtney doll helps to bring both worlds and the story into P1s life and imagination. The doll comes with a microphone, tiara and shoes. Her dress changes with a lift of her arm and she sings. Transforming from princess to rock star. I have to admit that my favourite part is certainly the fact that the dress cannot be removed as I seem to spend my life redressing Barbies! There are two songs that the Barbie sings which are activated by pulling her arm up or down and also her necklace has a button to press.

All the girls love this doll. Probably because it sings but also as there are more modes of play with the two different transformations. The Barbie costs around £20 which I think is such a fantastic price for a Barbie as they also seem to be getting expensive lately.

A really lovely Barbie that transforms from Princess to Rock Star in an instance. Excellent price too.