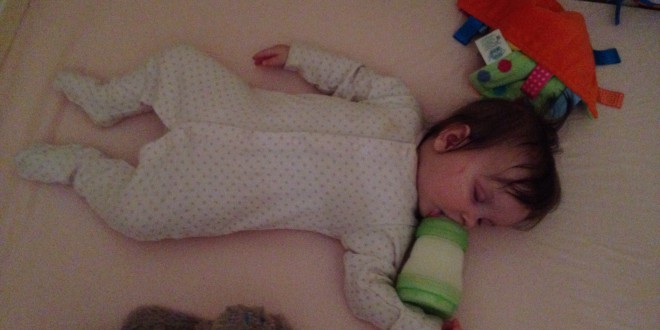 It’s 9:30pm and I’m tucked up in bed. I’m exhausted and have had enough. For nearly four weeks, the clever ones will realise this was the clocks going forward, my evenings have been sucked away into the oblivion. Rewind a week before the clocks and I had finally gained a child free moment of the day to blog, to watch telly and to chat with hubby for hours on end. Undisturbed. Bliss. That seems like such a long time ago now.

Just before P3 turned 6 months, just before the clocks going forward, I’d made the decision to stop holding her in the evenings and brave her being put to bed. She always fell asleep aprons 7:30-8pm every evening in my arms and slept until we placed her in her SnuzPod, she’d have a feed and be instantly back to sleep until the early hours. It was the same every evening so it was clear she needed her own bedtime just like her big sisters. It went so well and like I said, I’d gained some adult time.

Then the clocks went forward. P1 and P2 are no longer asleep by 7pm and they are no longer easy at bedtime. Something we’d only just mastered. At first I was adamant they would learn, they had to, they would go to sleep whether they liked it or not but quite frankly they couldn’t/wouldn’t whilst it was so bright in their room. So up went the Gro Blind to darken the room a bit. Every evening now I place P3 in her cot with her bottle of milk that she holds herself whilst I help the other two get ready for bed. This is about 6:45-7pm. The time they’d usually be asleep by previously. We do everything the same. I leave the room and return to P3 who’s either asleep already or just dozing. I sit quietly checking my phone to make sure P3 is asleep and the other two are quiet.

Sometimes they are. Most the time they’re not. I have to go in to the room on average 5 times from 7-8:30pm. Hubby too has his turn once or twice. It’s normally P2 that’s the issue which bemuses me as she falls asleep fine during the day (in the same room, brighter). By the time they do eventually give in, after P2 having her milk topped up once or twice in the process, it’s nearly 9pm.

I return to the laptop to get on with my blog work and within about 15 minutes I hear the “I need you” cry from P3. I’m back climbing the stairs for what feels like the hundredth time in two hours. She’ll then stir another once or twice, like tonight and I’ve just given up.

I can normally laugh it off and dream of the future when they all realise that actually time in bed is such a luxury. But tonight I don’t feel that way. I feel worn out and old. It’s not helped that I know I’ll be up another four times at least in the night with P3 as her sleep has deteriorated since moving to her cot. P2 also had me awake twice in the night last night. I just don’t know how much longer my body can cope with broken sleep. It just can’t be healthy! 26 months and counting.

I want the clocks to go back again.