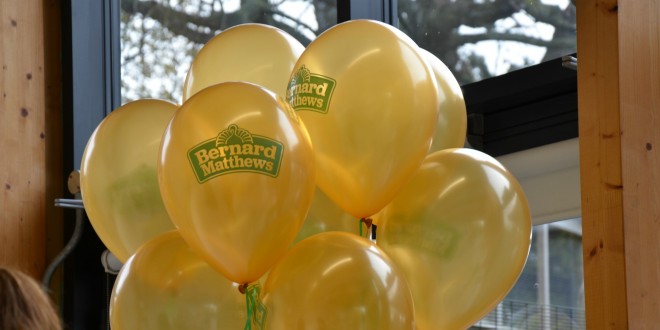 As part of being on the Bernard Matthews Family Panel, we were invited to their Blogger Event at the Horniman Museum and Gardens in South London on Saturday. I originally planned to go by myself with P3 but the trains were extremely disrupted so Hubby offered to drive us as it’s only 22 miles away. I hadn’t heard of the Horniman Museum & Gardens so when we arrived it was exciting. The grounds are beautiful despite the weather being awful. We headed for The Pavilion as instructed by the BM Team. We were warmly greeted and offered drinks. The huge table had been set out with Duplo, crayons, pencils and Bernard Matthews inspired colouring sheets. We were given a talk by Olia Hercules on styling food for the best photos. It was really interesting. She spoke about the rule of three, to always take food photos during the day and to use props to add colour for example children’s plates, cutlery or flowers etc. One thing she also said was to never overcrowd a plate/bowl and this is something I’m very guilty of.

We were all then given a bowl of lettuce, a pot of chopped tomatoes, croutons with gratings of cheese, salad dressing and of course Turkey to make a Caesar salad. P1 helped to create the salad and we took some photos. I actually think that the photos I took of the salad are the most professionally shots I’ve ever taken. I’m not a fan of salads on their own. I’ll quite happily eat it with a jacket potato or as a side dish to food but never as the main dish. But because I’d made this one, seen what went inside it and was quite pleased with the outcome of my photos, I decided to give it a try. It was delicious!! I even ate the tomatoes. I’ll certainly be making more salads and will definitely be putting Turkey inside.

It wouldn’t be a Bernard Matthews event without the signature Turkey Dinosaurs. So the next thing we styled was of course the dinos. This task was a bit harder I think, not only because P2 swooped in and stole both of the dinosaurs we were given, but because they are quite boring to look at really. We were given two pots of sauces to add colour to the plate. Such a great tip!!

The angle of the light is the key to a fantastic photo. I saw this when taking the dinosaurs photos. We were sat facing the huge windows so taking photos of the dinosaurs with fantastic light was quite tricky. I had to move myself to a different angle. My favourite photos was of P2 pulling her “roar” face whilst eating the dinosaur. P3 managed to sleep the whole of the food styling talk and tasks. When she did wake she had a short feed, a bottom change and then fell back to sleep in my arms ready for lunch and the rest of the event. She actually didn’t wake until we got home! We all then took part in a bit of market research. Bernard Matthews are really trying to promote that Turkey isn’t just for Christmas and that it can be enjoyed all year round. We took part in a few games of guessing the flavours of different bits of Turkey. It was amazing and so much fun. Hubby really enjoyed himself too. I really enjoyed myself at the blogger event. It’s given me such inspiration as lately I’ve been worrying about where my blog will be in 20 years time when my babies aren’t babies anymore. I’ve gradually been introducing food to my blog anyway so maybe this is the avenue I want to explore.

(We were invited to this blogger event, however I was not asked to write a post. All opinions and photos are of my own)