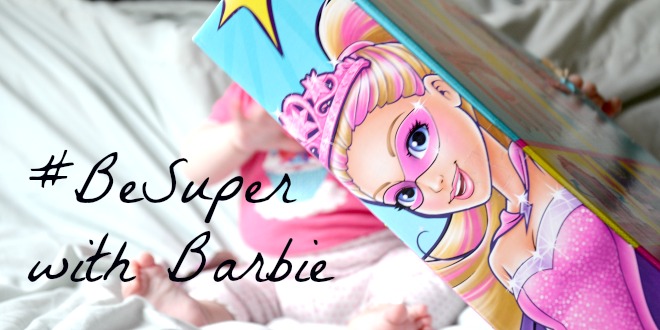 #BeSuper for Superhero Day with Barbie

Today is National Superhero Day, a day to celebrate the heroes and heroines but the thing is, there aren’t many well known heroines! When I think of a lady superhero my first thoughts are Cat Woman but I don’t actually know much about her. We were asked to host a Princess Power Party. I don’t think in a million years I would ever have thought Barbie would become a Superhero but for the first time in 56 years, she is pulling on a cape and putting on a mask to celebrate National Superhero Day. We were supplied with some goodies from the new range of Princess Power goodies; a Barbie Super Sparkle doll, Corinne doll and Chelsea, colouring books and the new Princess Power DVD which was out in February this year. It’s available on DVD and digital download. We actually used the code provided inside to get the film on my iPhone so they could watch it from their high tech vanity case that has a smartphone holder. I specifically love the Kara doll who, on a press of a button, transforms from a regular Princess into a Superhero! So P1 was allowed to invite 5 friends and that she did. However, only two could make it and one of those was technically family. I was quite relieved though as our house is certainly not really suited for play dates and parties. I had wondered how I’d have coped with 8 children at once, my worst nightmare and I myself would have needed some super powers.

As it turned out to be a small gathering, I wanted to do a focused activity to start it off and then allow the children to have free rein, as such. I googled simple craft ideas and came up with a sun catcher idea made from balloons, tissue paper and string, a little like papier mache. Unfortunately, the kids weren’t too keen on getting sticky and so that idea ended up with my MiL and me finishing the balloons ourselves. The children were all so well behaved which of course is always a bonus. We used our props from The Little Things to have some fun which went down nicely. They are little foam photo booth props on sticks. Then they just generally played some games together. Just before it was time for P1s friend to go home, I put the DVD on to have a sort of calm down time and there was silence from all four! I really enjoyed the play date party. My MiL and I nattered for hours and it was so lovely to actually not feel stressed about having friends over. It’s so hard to define what makes someone, an ordinary person, a Superhero. It’s all the super things they do for someone, the selflessness, the courage and kindness. My girls have qualities that make them my Superheros and I hope they see me as theirs. My MiL is a real Superhero though, she has so many solutions and ideas for nearly every situation, she’s kind and always, always goes above and beyond her duties as a friend, mother, daughter and sister. She’s certainly Hubby’s heroine.

What Super Powers do you have? Or your children?