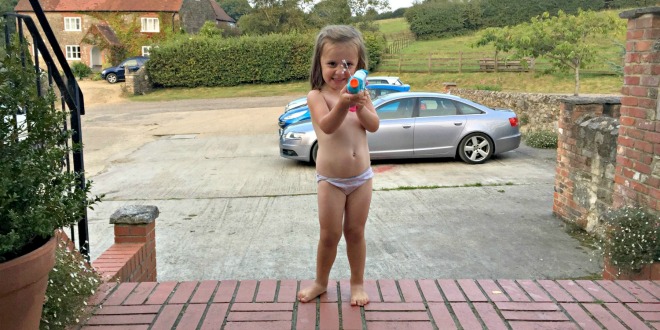 Big Family Holiday To The Isle Of Wight – Day Seven

A mixture of exhaustion, short tempered children, a bit of sun burn on Hubby’s back and the end of holiday blues, meant that Hubby and I weren’t really feeling our last full day on the Isle of Wight. We attempted to put on a brave face and headed to The Needles. I had no idea what to expect from the landmark attraction. I didn’t even realise it was a landmark attraction. On arrival we were quite shocked by the prices of everything. There’s some amusement rides that you can buy tickets for and although they are advertised at good value, Hubby and I agreed that they just weren’t for our strict budget. It was something like £9 for 12 tickets but each ride was 2 or more tickets each so the girls would only really have one or two goes. We ended up heading into the Alum Bay Sand Shop so the girls could fill cute little plastic moulds with special alum bay sand. At first we weren’t going to let P3 have a go but she was really interested. Hubby’s Nan also filled the shape of the Isle of Wight which I thought would make a super cute memorable gift. After deciding we wouldn’t be spending much time at The Needles as we couldn’t go down the chairlift with all three girls, we headed for a walk to see the actual Needles. It was a really pretty walk up a long hill with the sun shining down. It was pretty nerve wracking looking over the edge of the cliff. We didn’t get to see The Needles as we had the pram and there was steps to get a view without paying money. We headed back down and decided to find a beach nearby to chill. In the car on the way to find a beach P3 got rather travel sick. She was actually sick right by a pub we’d spotted a few days before with a lovely play area for the kids and a bouncy castle. We decided to have some lunch at The Fighting Cocks and it was absolutely delicious. The girls played happily together for a while too. After a while they began to get moody so we headed back to the house to start packing. We’d actually forgotten to take a key with us and my MiL had ended up with both sets. So we were locked out for a little while, I even climbed into one of the open windows to try and find the key. When my MiL eventually got back it was all systems go to get the car packed back up. All of the family had started to pack and hubby decided to amuse the children with a water fight using the water guns that my MiL had bought at the beginning of the holiday.

It was a lovely way to chill the girls out and have a bit of fun. P2 especially got into the spirit and looked quite scary at times as she raced towards you with cold water spraying! I was exhausted by the end of the day but felt relieved that pretty much everything was packed up which meant less of a rush in the morning for our journey home.

A playlist of all our Isle Of Wight adventures can be viewed using this link, or you can view days seven and eight below.

You can find all of our Isle Of Wight holiday posts by clicking here.
Share
Previous A Family Meal At ASK Italian Rayleigh
Next Debenhams Supporting BBC Children In Need