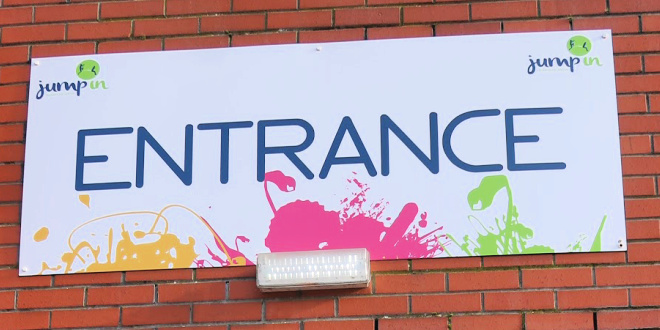 I’m still pinching myself that Eva is now seven years of age. It feels like yesterday that our chunky, cone-head baby arrived into the world. But it happened and each year we celebrate.

This year we had the pleasure of hosting a joint party at Jump In with Eva’s friend from school. Both girls were so excited about taking their friends to the trampoline park. As with most venues that offer parties, there are a few options to choose from at Jump In. There are four main options; a toddler party package, a basic birthday party, themed party or a glow party. All of the parties are two hours long. The prices vary of course depending on the package you opt for and the venue (Jump In has venues across the UK).

We opted to have the Glow Party as it meant we could have a separate party room. Eva and her friend invited 12 guests, so we had a total of seventeen children in the party. This cost us £220 for 10 guests then £20 for each additional guest.

Before arriving at Jump In for a party, it is useful to get each of your guests to sign the safety waiver online. You are not allowed to jump without it being signed. Of course, there was a couple of people who hadn’t signed so I was able to sign a temporary one on a piece of paper. Once all of your guests arrive, you are greeted by your party host. This is a member of staff who stays with you for the entire party. We had been assigned two members of staff, possibly because of the large number of children we had or maybe just because we had been lucky.

The staff introduced themselves to the birthday girls, they gathered up all of the children and handed them all Jump In socks. These are special socks that have grippy rubber underneath to help prevent injury, these are part of the party package and you can take them home at the end of the party.

Each child was also given a wristband which indicates they are part of a party and then taken into the safety briefing room. The video itself only lasts around 3 minutes but the entire meet and greet take about 30 minutes. This is all included in the two-hour time slot of the party. After the briefing video, the two Party Hosts gathered the children in a line to do the Konga. They kept the kids focused and excited to jump.

Although the children could move freely around the trampoline park, the two-party hosts initiated some focused activity in the foam pit. I was impressed at how attentive they were with the children and enjoying their time with them which of course made for lots of laughs and fun.

As I mentioned earlier, we opted to have a private room away from the hustle of a busy Saturday at Jump In. However, there was a small table reserved for grown-ups to sit on with juice for the children. This was extremely handy as jumping is a thirsty business. The jumping session lasts one hour. Realistically, we didn’t need to supervise at all because the party hosts took over and made sure the children were safe and entertained the entire time. I, of course, went up there to take photos and video but I wasn’t needed at all.

Once the hour was over, the children were gathered near the table ready to head to the party room for food. Even queueing for this was made fun with a song, you can see that in my video below. The Glow room was incredible. It was exactly as it says, glowing! The kids were in awe of it. A table big enough for all of our guests had been set up complete with plastic plates, cups and serviettes. We didn’t need to do anything in terms of preparation and set up. Jump In had taken care of that themselves.

For food options for the party, you could pick from cheese pizza, pepperoni pizza, a selection of both the flavours or hot dogs. We opted for a mixture of cheese and pepperoni.

I remember attending a party a few years ago for one of Freya’s friends and the pizza was pretty poor. However, this time around the pizza was top quality! We had a slight situation where a child hadn’t made us aware of a dietary requirement, but Jump In took this in their stride and quickly sorted the child out with the correct pizza.

There was the right amount of food for the children with a few extra slices for the grown-ups to enjoy too. You do have the option to add on a vegetable or fruit platter, slush drinks, ice cream and even tea/coffee for the adults attending but we chose not to. I hate all the waste that comes from excitable children who don’t want to sit, they want to be up and having fun.

The party hosts took care of the serving out of food and drinks for the kids. They even tidied away the empty pizza boxes and plates too. I felt a little lost if I’m honest as everything was being taken care of. As the children either finished or continued to eat, the party hosts conducted a little dance party. Small children dancing and screeching. The children were entertained the entire time.

To complete the birthday party, there had to be a cake of course. This is one of the only things you need to bring with you to a Jump In party along with the candles and matches to light the cake with. Our friend (the parents who were sharing the party with) made Eva’s incredible birthday cake! It was so impressive and very yummy too.

The very last thing to do was wait for the guests to be collected and take home their party bags. This can also be added on through Jump In, however, we opted to do our own. This was the most stress-free birthday parties we’ve ever hosted. It was so simple to organise, very little preparation and all we had to do was turn up. Jump In took care of everything else from keeping the kids safe, serving food and even tidying away. What more could you ask for?

I filmed the party which I hope you’ll enjoy watching!

Disclosure: This is a collaborative post. We received a discount on our party package.