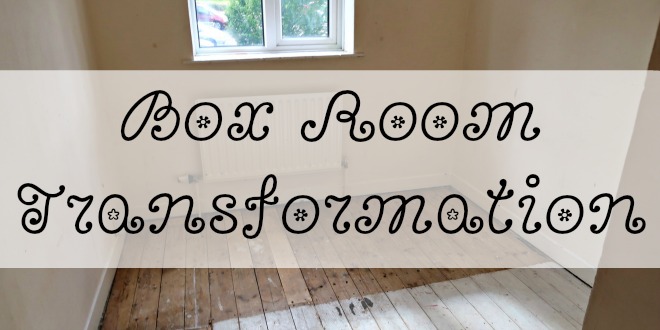 I’m back with another room tour! This time it’s the box room of our house. We’d always said that P1 would get her own room when we moved. It was something that was really important to me as it had been suggested that it could help P1’s behaviour.

Just like the rest of this house the room was a magnolia shade with bare floorboards. It was ultimately a blank canvas for us. We made the big mistake of showing P1 her new room and allowing her to pick colours. A huge part of me wanted her to love her room, to own it as such but the excitement and frustration P1 felt made her physically ill. She was white as a sheet, had a bad headache and was generally panicking about the whole thing. So once we’d decided colours, The ceiling was next on the list with white ceiling paint. P1 had picked to have blue paint on her walls which I cannot remember the name of. At first she wanted a really grass green colour but thankfully we managed to persuade her otherwise. In her head she wanted it Minecraft inspired. The blue that we used was a much subtler colour and far from the princess look I’d always dreamed of when she was little. The carpet was from Carpetright. At the moment P1 has her original bed that we had from the old house. It’s a mid sleeper put on stilts to give her a little more head room underneath. In the future I’d like to upgrade to a taller high sleeper so that we can fit a desk underneath and possibly a cupboard. Underneath she currently has a mini desk that she keeps her Harry Potter Funko Pops on as well as her drawing/writing materials. She also has a fabric toy box full of craft kits, beauty kits and that type of thing. Her large teddies also live under there. As you walk in, along the left hand side of her room is her Ikea unit which stores her Minecraft toys, soft cuddly toys and on top she has all of her important items. At the moment she has a cardboard Winnie the Pooh storage unit with her complete Peter Rabbit collection on top. This storage unit has her tiny toys like Shopkins, fidget spinners and as you can see P3 loves playing in this part of her room.

We were kindly given her bookshelf from my mother-in-law. P1 was so excited. She has a thing for collecting certain chapter books and was so thrilled to finally have a home for everything. Her bookshelf is also a really useful reachable surface for P1 when she’s in her bed. It has her GroClock which she is very reliant upon each day. Over on the right hand side of her room is a little mini armchair, I’m not sure she ever uses this but it makes a great stool for her to reach into her built in wardrobe. We’ve been very lucky as this house has a lot of built in storage cupboards upstairs, and considering P1’s room is rather small, it’s been great to have that extra space. She’s been really good at organising her wardrobe too!

So there you have it. A quick room reveal and tour. I filmed a more in depth room tour which you can view below. I hope you enjoy! I’m slowly getting round to filming and photographing the other rooms of our house.