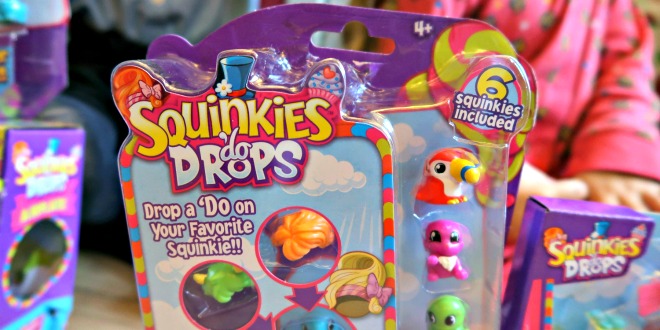 As if there wasn’t enough little tiny collectable toys in my house to get lost or sucked up the hoover, along come Squinkies ‘Do Drops through our door. These were actually first launched in 2011 but have made a comeback this year. I’d never heard of them and was really excited to find out more. The girls each received three Mystery Villas, Squinkies Starter Pack and the Squinkieville Airplane from Season 1 to start their collection. Each starter pack that we received was actually filled with different characters which was brilliant for getting to know these really cute toys.

The Squinkies are really tiny and seem to have a hole in their base which would be perfect for popping these on top of pencils too for an older child. Season 1 has over 100 Squinkies to collect and over 50 accessories which are either hats, hairstyles or accessories. The Squinkies Starter Pack comes with 5 Squinkies plus an additional blind bag surprise and 2 ‘Dos. This is a great way to start a collection especially as the starter pack only costs £6.99!

The Squinkies Mystery Villas are brilliant. Inside each Mystery Villa is 2 Squinkies, a ‘Do and a collector card. The villa itself is then used to create your Squinkieville village in your own home. The girls were squealing the entire time I was helping them open up their new toys. They were matching their characters to the collector cards to figure out their names. P3 even got some glittery hats which they all seemed very ecstatic about.

The Squinkieville Airplane is super cute. It opens up and has plenty of space for the Squinkies to hop aboard. The set each comes with two Squinkies, a ‘do and airplane accessories. The girls have had so much fun making up games about holidays with these sets and I love that they only cost £9.99 which make them super affordable sets! I am finding these little guys everywhere in my home. If the girls go quiet for a little while they are usually found sitting playing make believe games with them which is a definite positive alternative to causing mischief. I love them. They are slightly squishy in texture and just really adorable. I am already looking into getting more and even a little bucket to keep them in so they don’t get lost.

User Rating: Be the first one !
Share
Previous Mother’s Day 2017
Next A Trip To Little Street Maidstone