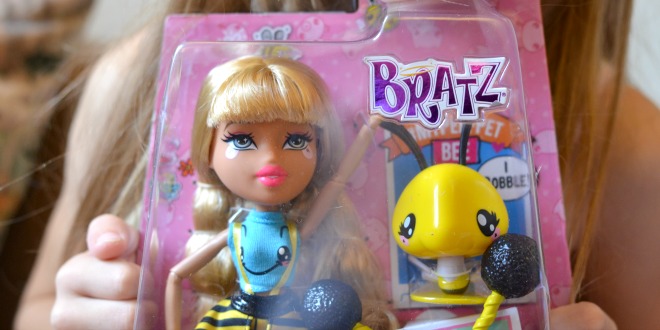 I recently got the pleasure of being insulted by an older man for the job that I have. Apparently social media and the internet is ruining the world. But quite frankly I believe it’s enhancing the world and that’s why I do what I do. Kind of. But also, I don’t really think you can hide away from social media anymore. Nearly everyone has some sort of social media account. Which brings me on to the new Bratz Insta-Pets Doll range. The Bratz consist of five girls, although when I was a child there was only four. In 2015 they introduced a new character called Raya which happens to be the doll we were sent to review. It also rhymes with P1s name which she finds fantastic. The other four girls in the Bratz team are; Cloe, Yasmin, Jade and Sasha. The dolls have jointed arms and legs and still have the detachable shoes with no feet. P2 loved Raya’s cute phone with bumble bee case that matches the bobble head Bumble Bee pet. P3 enjoyed putting her antenae headband on her head over and over again too. The idea of the Bratz Insta-Pets range is that the girls are using their phones to take photos of their pets and uploading them to Instagram. They are also having lots of fun dressing up like their pets too.

P1 posed so that Raya could take some photos of the two of them together which I thought was so cute. Each doll costs just under £20 which is about average for a doll of this type. I think they are brilliant with such a great concept behind them. All three of my girls have enjoyed making up games with Raya and her bobblehead Bumble Bee. The Bratz Insta-Pets dolls are a cute twist to the ever growing social media craze.

User Rating: Be the first one !
Share
Previous Learning More About McDonald’s Restaurants
Next Halloween Half Term – A Microbreak With Marriott Hotels In The UK