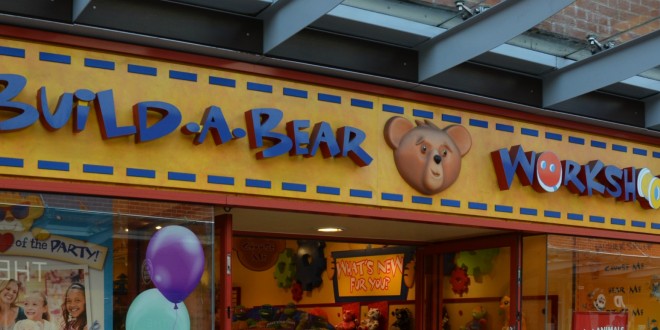 As a last little treat before the end of the school holidays and what feels like the end of summer, the girls were invited down to our local Build-A-Bear Workshop. Build-A-Bear Workshop is the leading and only global company that offers an interactive make-your-own furry friend retail-entertainment experience and has over 400 stores worldwide. Our nearest is Maidstone.

We kept the whole trip a secret. As we approached the Build-A-Bear Workshop we asked P1 to look around to see if there was a shop she’d like to look in. Of course she immediately spotted all the teddies and the bright yellow signs. Inside we were greeted by two very friendly and bubbly ladies who really helped to make P1 feel less shy.

Both the girls were allowed to choose from the complete range of bears. There’s so many to choose from ranging from about £7 to £20. There’s bears, monkey’s, My Little Pony range out at the moment, Palace Pets and so much more. Rapunzel’s Palace Pet, Summer, captured P1s heart and to begin with a glittery bear had caught P2s eye but she soon put it back, picked up another, put that back and so on, until we stepped in and P1 helped to choose Ariel’s Palace Pet, Treasure. The next stage was to choose what sounds they wanted. We chose a cat sound for P2 as she’s really into saying “meow” when she sees a cat. P1 took a while choosing, she was very shy at this point and very quiet, the whole time the lady was being so patient and kind to her. In the end P1 chose to create her own which she so very kindly asked me to create for her. It now says “I love you” in my voice over and over again which P1 loves. They then had to choose which scent they wanted inside their pets; P1 chose the cupcake smell and P2 gave the most reaction to the Cotton Candy. The girls were then given a heart that actually beats. The lady asked them to do several special things before it was placed inside the teddy ready to be sewn up after filling with stuffing. I felt a little emotional as I watched P2 copy and do all the actions by herself. It was a very special moment for hubby and me.

The lady then showed them how to press the pedal to fill up their pets with fluff, again both girls joining in. The next step was to “wash” them. Another pedal blew air out on to the pets where they were given brushes and able to “wash” the pets. P1 really enjoyed this bit and watching P2 copy was again a very emotional sight. As part of the package they were allowed to also completely kit the two Palace Pets out with clothes and accessories. The whole time we had one-on-one attention from the lady. Who helped the girls pick and dress their pets. We then used the computers to register the pets “birth”. P1 changed her Palace Pet’s name from Summer to Holly but we kept P2s as Treasure. They had a little photo taken outside the shop and were also given a reusable backpack for the pets which allowed the pets to have their arms out. A great new feature to the Build-A-Bear workshop, although the original option of the cardboard house is still available and the reusable backpacks are an added cost. Build-A-Bear is what you make of it though. It can be very expensive but there are cheaper options available and cute little Build-A-Bear Buddies which would make perfect gifts. Both girls had a magical time and thoroughly enjoyed the experience. I was completely flabbergasted to see P2 understanding and joining in with absolutely everything, her attention captured the whole time. It was wonderful. It was a hard day for me, a year from my Nan’s death, and to watch them filled with joy was exactly what I needed to keep my mind occupied. (The girls were honoured to be invited to build their own bears. They were gifted a bear each, along with a complete outfit of accessories and the experience of the workshop. All photos and opinions are of my own)

A really special experience for children of all ages. A truly magical time spent creating their own special cuddly friend.

User Rating: Be the first one !
Share
Previous Pregnancy Diaries – 35 Weeks #3
Next Back To School