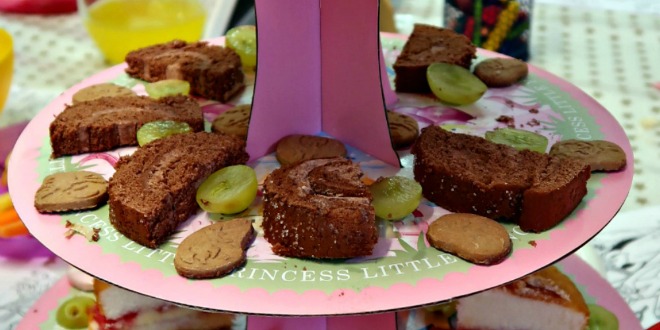 When it comes to birthdays, we have always celebrated by inviting family to our house and having some party food. But ever since P1 start primary school she has been planning and begging for various parties and up until this year we have always refused. I felt huge mum guilt but also never understood the importance in it all. But this year we decided to arrange a joint party for P1 and P2. There’s about a month gap between their birthdays so having a party in mid-January felt perfect.

I sat the girls down together and asked them exactly what they wanted to do for their parties. I was quite pleased when the pair of them shouted out soft play. I knew the perfect venue and began arranging things pretty quickly. Buzy Bees was our chosen soft play venue. We only came across it at some point early last year and have been really impressed each time we visit. Buzy Bees is in New Ash Green which is about twenty minutes from Sevenoaks. Buzy Bees is a smaller soft play venue but I quite like that. The smaller size means that we are actually able to see the girls wherever we sit. We are at the stage where our youngest is able to do the softplay by herself so being able to keep an eye on her is a priority. The soft play is split up into three sections; a small area with ball pit for under 2s, a medium area for under 5s which also has a ball pit and an upstairs with slide, then there’s the larger area for over 5s. They also have a lovely outdoor space with various ride ons and because of the very rural location, it’s extremely peaceful outside and a perfect place to cool down when the kids get a little sweaty.

My favourite part of Buzy Bees is the cafe and seating area. The adorable prints hanging on the wall really excite the blogger inside of me. The seating area has a large window which lets in lots of light and looks out onto fields and countryside. The cafe has a lovely menu of foods, snacks and drinks to enjoy and they are all very reasonably priced. I’d highly recommend the nachos, oh and the children’s chicken nuggets. Most importantly everything is spotless and we’ve been quite a few times, this standard is upheld consistently. The staff are also always very welcoming and friendly. Booking a party with Buzy Bees was super easy and the staff were really kind to a very inexperienced me. There are four party packages on offer Gold, Silver, Toddler and Exclusive. We decided to book the Gold Package party which includes two hours of soft play use, exclusive use of a themed party room, hot or cold food, deluxe themed party bags, invitations and a return visit for the birthday child.

A few weeks before the party day we organised the theme with Buzy Bees. They have a huge selection of theme choices and my girls kept squabbling over what one they wanted. So I settled the argument and picked a safe option of Disney Princesses. You have to have a minimum of ten guests but we opted to have fifteen so that the girls each had a decent amount of friends each. The night before the party I felt really on edge. Nervous about being a host and also like I was forgetting something major. I felt like I should be loading the car with balloons or party food but all I needed on the day was the birthday girls, a guest list and a cake. We arrived at Buzy Bees just after opening time. It was the day after we had snow and the place was empty which was lovely and gave me the opportunity to take photos and video.

We were shown to our party room. It was beautifully decorated with Disney Princess birthday banners, cute tassels hanging on the window with number balloons for their ages and a fantastic light box with their names and ages. I loved that, I’ve always wanted one myself. There was a little CD player playing music too. On the table there was proper plastic plates (from Ikea I think as they are the same ones we have at home) each set with a napkin, cups and a really pretty princess party hat. There was also jugs of juice and water already on the table too. Our guests starting arriving at our party start time. They have three party slots available and we chose the early morning one that is 10:30am to 12:30pm. The children dumped their stuff in the party room and went running off for some fun. I was so nervous about mingling with parents and making sure all the children were having a great time. I’m not a very confident person so hosting a party was really pushing my boundaries.

The children were racing around, the older ones even took themselves into the party room to sit and chat which was super cute. I loved that they could happily come and go from the party room throughout the two hours. There was smiles all round and I felt very happy and content that everybody was having a good time. After about an hour, the food was brought out. We had opted for the hot food option which included mini hot dogs, cocktail sausages, chips, pizzas, nuggets, cucumber and carrot sticks. The staff topped up the juices throughout the party too. I honestly have never seen food disappear so quickly in front of a range of young children. I honestly think that this spoke quite loudly for the food quality. Most importantly, the parents were super impressed with the quality especially the chicken nuggets.

After the main food, the Buzy Bees staff brought through the birthday cake. I love how they had put eight candles on one side of the cake and four on the other a lovely touch for our joint party. Everybody sang happy birthday and then the cake was taken away to be chopped up for the party bags, which was done by the staff. They then brought out the dessert plater or in our case two beautiful Princess cake stands. It had a sweet selection of cakes, biscuits and grapes. These were also scoffed down instantly. The children were able to play for another 15-30 minutes before parents started to turn up for home time. I wa so shocked at how well everybody had played, behaved and ate. We received great compliments from the parents who most had never even been to Buzy a Bees but were super impressed. Each child received a deluxe party bag which was themed with bits inside. I actually wasn’t able to take a peek inside as they’d all been beautifully tied up with ribbon and a gift tag, then my girls gobbled everything up on the journey home. But what I did gather, there’s sweets and a really lovely larger gift. I had actually forgotten to tell them that I had two boys attending but Buzy Bees used their own intuitive and popped out two boys party bags for me.

I was seriously so impressed by the party and so was Hubby. He has even said we’ll be booking again for next year as everything was so perfect and went so smoothly. The girls not only got to experience their first birthday party but they also received some amazing gifts from their friends. All were so thoughtful, especially a gift P1 received which was two Harry Potter books, something she’s only just getting into. She was thrilled. So the party Package we had costs £14 per head at a weekend or £12 during the week. The price is definitely slightly higher than our other local soft play centres. However, after researching, none of them offer the luxury and feeling that Buzy Bees did. One having a limited time in a party room and the other only offering cold food. Buzy Bees is most definitely worth the extra few pounds.

I create a little video from our party day. I hope this gives you a feel of what a party is like at Buzy Bees.

The staff were friendly, enthusiastic but left us to it which was perfect. They provided all the decorations, food and the soft play was clean and tidy. Everybody's had a superb time!!

User Rating: 5 ( 1 votes)
Share
Previous Having A Schedule On My Blog & YouTube Channel
Next 7 Perfect Picks For Your Little One