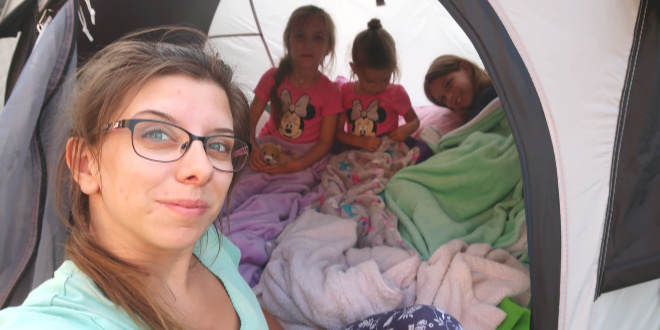 The Reality Of Camping In The Garden With Kids

Camping in the garden sounded cute. We could make s’mores out of marshmallows and digestive biscuits. Watch movies on the iPad. Have toilets and lighting not too far away. We’d get cosy and laugh. Wake up in the early hours a bit sweaty but feeling cold all at the same time.

Camping in the garden wasn’t what it cracked up to be. I’m wondering if that’s because we were trying to fit four humans inside a two-man tent. Or perhaps it was the fact our neighbourhood is rather loud with chickens, a cockerel, foxes playing in the early night sky.

I was determined to create loving memories we could cherish but as always, it didn’t turn out the way I hoped. I could almost hear my husband’s voice saying “I told you so”. I’m the one who always goes headfirst, yes I want to do this for them and I’ll suffer whatever they throw. He’s the one who’s more reluctant, you’ll regret it and annoyingly, he’s nearly always right! 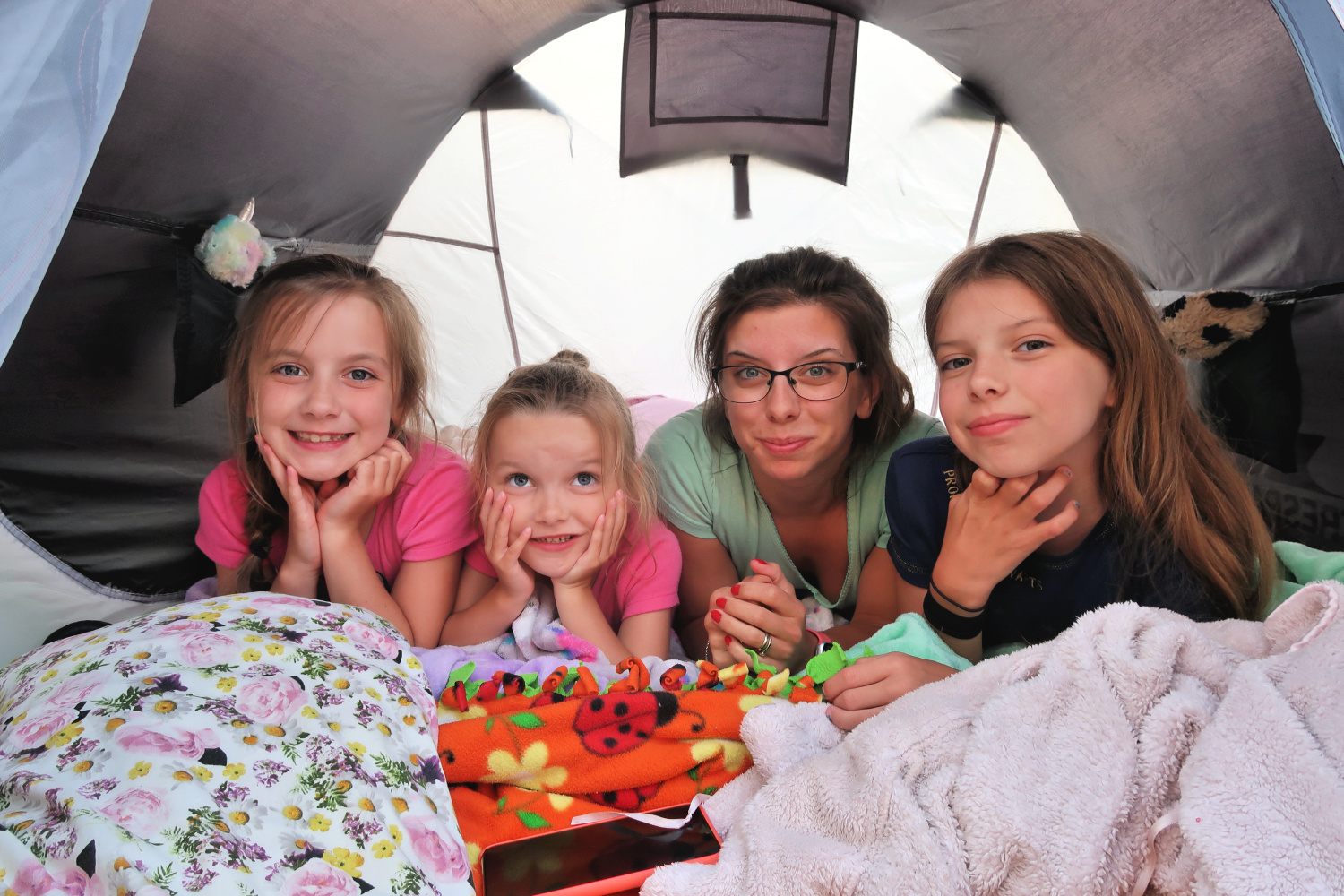 Our garden camping adventure was brought on by Elsa. My five-year-old daughter. She was desperate to go camping, create a little campfire and eat s’mores with her sisters. Hubby ordered a cheap two-man tent for them to act out the camping scenario during the day time.

But her little excited face and the hopping up and down when the tent arrived, made me want to allow her to live the dream. I wanted to make it possible no matter what.

So we popped up the tent, laid out blankets and pillows. As I was organising it all and making it comfortable, Elsa’s little voice beamed “Mummy you’re making me cry. I’m so excited I get to camp in the garden”. This was going to be the best night ever!

It started great. We all squished inside. My three daughters were laying in a row lengthways whilst I had the tiny widthways area near the entrance. It’s a great thing to be teeny sometimes. It pays off. We used my iPad to put on a movie (Alvin and the Chipmunks Chipwrecked if you’re interested). 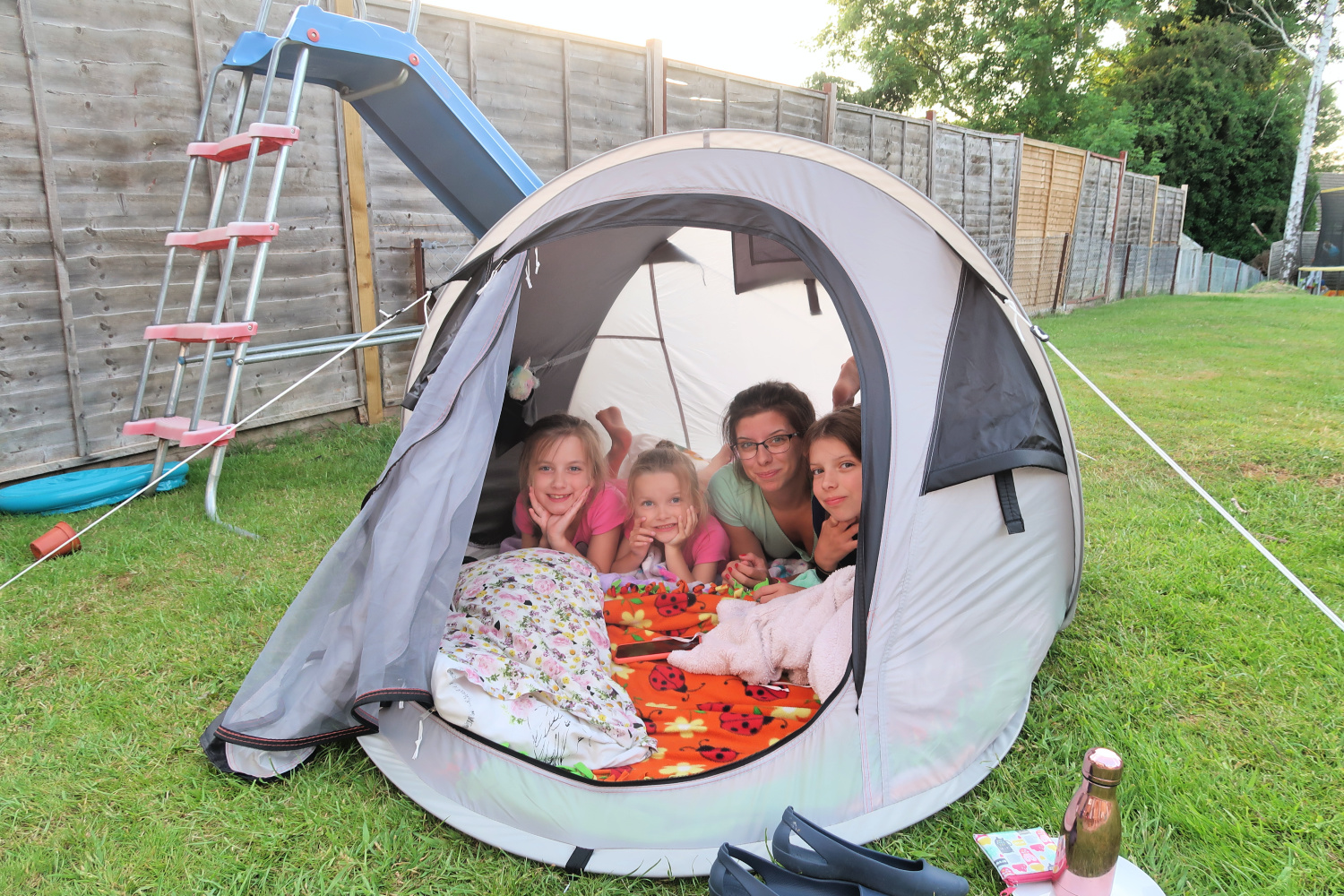 Then out of nowhere one of our curious cats decided to launch himself at the tent. It scared the life out of us all and the poor tent suffered the consequences of some tiny claw punctures. At that point Hubby was all “I told you so” as he used duct tape to repair the holes so that we could try to continue our camping adventure.

We snuggled back down, very wary of the cats prowling around outside and having to shoo them away every five minutes. Then the sunset and the birds began singing goodnight to each other, the cockerel was doing his thing and the girls were overtired.

Elsa couldn’t settle. Once she eventually fell asleep, she was tossing and turning. By this point, the foxes had come out to play which had my heart pounding. I had visions of foxes dragging our tent or scratching holes. They’re not that ferocious but at nearly 11 pm, your mind can wander.

At one point Eva sat herself up like a zombie. Then flopped herself on top of Elsa. I couldn’t settle, probably because I was curled in a tight ball on the hard floor in a two-man tent in my garden just metres away from my warm home and bed!

At nearly 1 am, I decided to gently ask Elsa if she wanted to go to her bed. She’d been tossing, whinging and elbowing Freya in the face the entire time. It didn’t feel fair to let her suffer any longer. Elsa didn’t take much persuading, she picked up her pillow and headed indoors like a flash.

With Elsa gone, I was able to top and tail in the space she left behind between Freya and Eva. Being able to stretch out fully felt glorious. Despite being shattered, it was peaceful listening to my two older daughters snoring and the faint sound of traffic, the occasional shuffle from whatever wildlife was roaming about the neighbour’s gardens.

Oh and in case you’re wondering, all the while this was unravelling, my darling husband had taken himself to bed early and was watching YouTube videos to his heart’s content. Well, that was until he was in charge of Elsa.

It wasn’t the camping trip Elsa had dreamed of. I’m so gutted that she didn’t manage to stay the entire night with us. Nevertheless, it was a camping experience we’ll all remember forever. 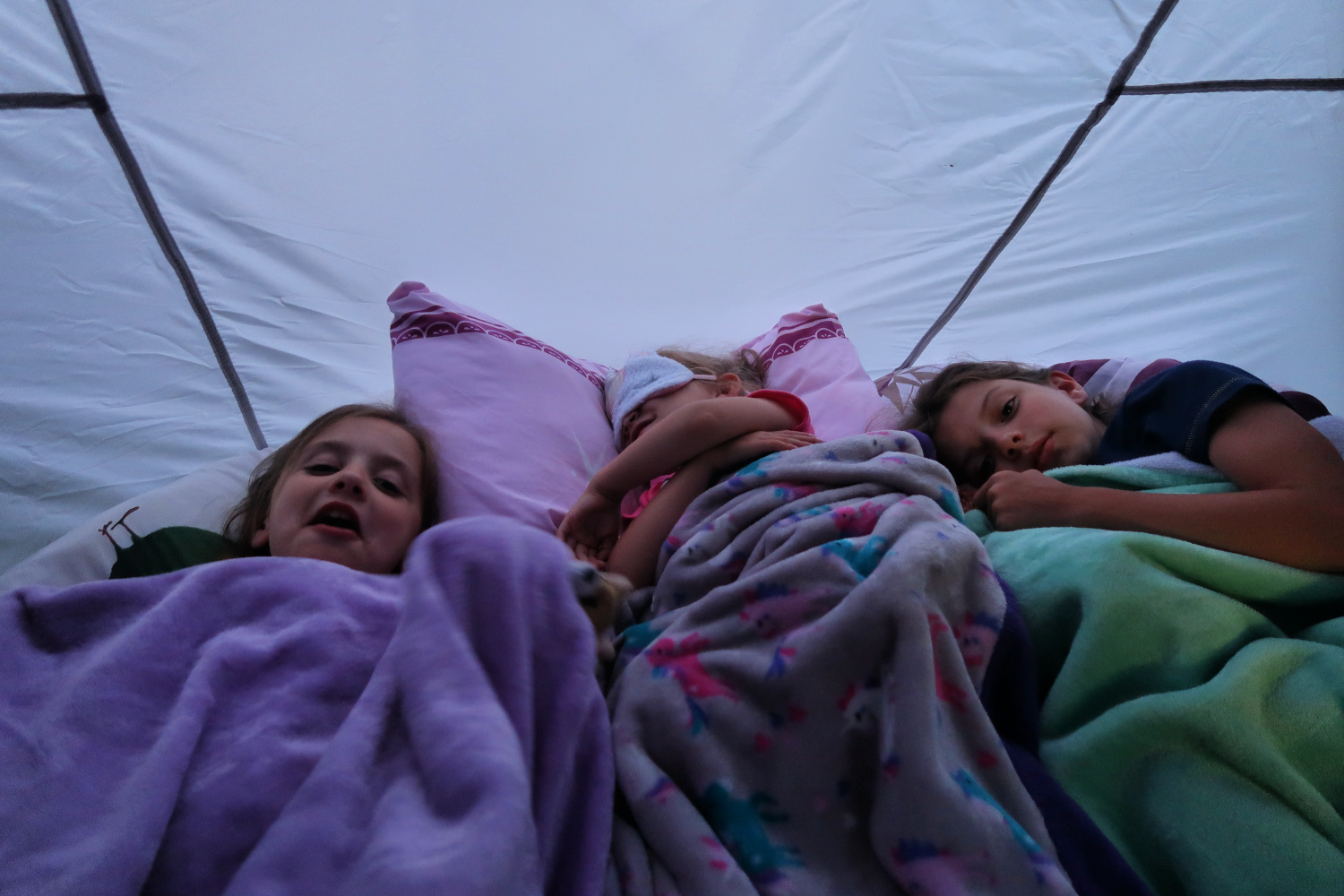