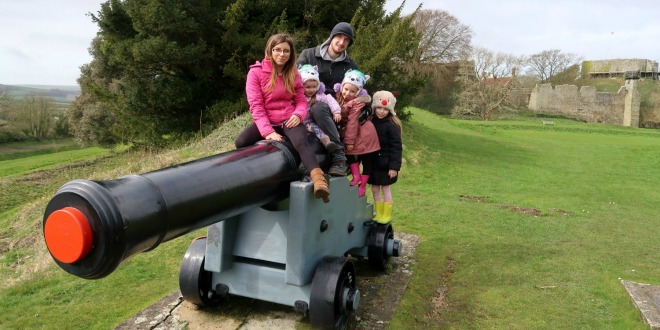 It was a rather windy and wet night at The Orchards Holiday Park. It definitely made getting ready for the day much harder than it would have if it was warm and bright. Breakfast was fed to the girls as usual – usual being three different breakfast options and then we headed out of the holiday park for another day of adventures. We were heading off for an English Heritage site called Carisbrooke Castle. English Heritage is a charity that helps care for over 400 historic buildings, monuments and sites across England. We have been National Trust members, which is similar, for about two years and have been looking into becoming members. We decided this would be a great time to join English Heritage. Carisbrooke Castle was about 15 minutes away from the holiday park, set in a beautiful village high up on the hill. I actually got little goose pimples seeing the grand castle towering above us as we drove up the lane. It was stunning. Carisbrooke Castle has over 1000 years of history. Most famously for Charles I being held here during the civil war, but even before that it was used by Anglo-Saxons. I always find it fascinating to imagine it back in the day, with women in pretty dresses and the atmosphere too. On a not-so-windy day, you are able to walk around the walls of the castle. Sadly, they were shut on the day that we were there. We did get to watch a really interesting talk about the use of donkey’s in the castle. All those years ago there is evidence of just one donkey being used for 16 hours a day to move the wheel that lifted buckets of water from the well. These days the donkey’s at the castle are contracted to only work a maximum of 6 minutes a day, but never exceed 3 minutes. Part of the castle has been converted into a museum. Personally I love walking round the castles and homes that are still in tact from the “olden” days but the girls seemed really interested at looking through the cabinets. It surprised me actually. It was also quite nice to get in the warm and out of the wind for a little while. We then had a quick snack and went to wander around the beautiful gardens. I honestly think that when the spring time brings up the flowers it will look even more amazing. P2 found a daffodil on the floor that she became obsessed with. Our next port of call was to explore the bowling green. We nearly didn’t because bowling green doesn’t exactly scream excitement for me. I’m so glad we did though as it was spectacular. The views, the history and the chance to get close to the cannons. By about lunch time the wind on the hill was just too much for us so we decided to head for JR Zone, an indoor soft play adventure zone. There aren’t too many of the Isle Of Wight and with the weather being not so great, I was expecting it to be quite busy. It was busy but not uncomfortably so. We found a table with seats as the kids went off to play. We love this play area and it’s definitely on our favourites list. There are lots of different zones to explore and all three girls are able to do the entire thing by themselves. Last time we went to JR Zone we had some cake and drinks, this time we opted for a proper lunch as we had hangry adults and children in tow. Hubby and I chose to have an All Day Breakfast, the kids had chicken nuggets with chips and beans. I was really surprised at the quality of the food. The girls loved it too! After a good few hours of fun we took a long drive to drop my mother-in-law off at her hotel. She was staying along Sandown beach which is a really busy part of the Isle Of Wight. P3 fell asleep and it was pretty long journey so we needed to wear them out once we arrived back to The Orchards Holiday Park. After some snacks we took a wander around the park for the first time. I was so surprised at the amount of caravans they have on site. The whole park doesn’t have a busy feel but there were loads of caravans suiting lots of different requirements. We found a dog recreation ground, a lovely recreation ground at the back of the park which will be useful during summer months and of course the tent and touring caravan pitches too. We then decided to head swimming again. The girls loved the pool and the sloping depths made it much easier to keep an eye on our three girls who cannot swim unaided. P2 made friends with the life guard and it was a really relaxed swimming session for all of us. I honestly thought we’d be able to wear P3 out. Hubby and I were literally pinning our eyes opening but P3 just kept on going well into the evening. She eventually went to bed at half past ten in the evening! I have eight blog posts from our most recent trip to the Isle of Wight and there’s a whole playlist for my Isle Of Wight holiday videos and I’d love it if you could pop over and take a watch. I hope you enjoy our video below.

Disclosure: This is a collaborative post.
Share
Previous How to Help Your Children Get the Best Education
Next L.O.L Surprise Pearl Surprise Review