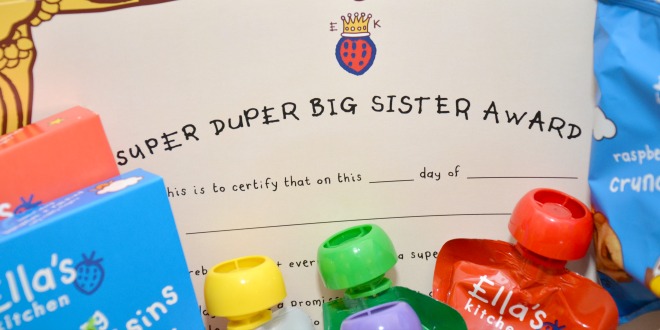 Being a sibling holds so many possibilities and responsibilities especially when you’re the big sister. You’re the one who will help your younger sibling to share, to play, to talk and develop. You naturally become a role model whether you like it or not. I was always close to my brother when he arrived. I remember being so excited, at eight years old I was responsible enough and old enough to understand. The first thing I said when I saw his chubby little body at the hospital was “I love him”. Although we are not very close any more, I still love and miss him terribly. Ella’s Kitchen sent my two a brilliant box of goodies to go alongside the Royal Baby’s arrival. It got me thinking about siblings and my siblings in particular. We are outnumbered with three daughters and we notice it when we venture outside the safety of our own home more than any other time. Having three is certainly a challenge every minute of the day but I am truly thankful. I’m thankful they are siblings.

Despite the wobbly first few weeks we experienced when P1 first became a sibling, she has taken it in her stride. As she’s growing and P2 is growing alongside her, I witness different strengths and weaknesses between their bond. The strength between these two is clearly the play side of things, when they both want to they play so wonderful and that impacts in the way P2 plays alone too. Their weaknesses are different though. Both of their weaknesses together would be understanding; P1 isn’t quite the type to naturally help her sister when we are out and P2 gets frustrated when she can’t get her point across. Together P1 and P2 make a pretty good team with P3 though and that’s why I’m celebrating them as Super Duper Big Sisters. Both of them are kind and caring. They share everything and anything, from food to toys and illnesses. They love her so much, sometimes too much when they’ll accidentally push her over when trying to give her a cuddle. I love how they both are quite happy to have their eyes grabbed, hair pulled and teeth yanked at by P3 without batting an eyelid. Laughing at her and making P3 chuckle. P2 is still the only person who has ever made this life lady laugh the mere three/four times that she has.

The Ella’s Kitchen goodies have strengthened their sharing abilities and both my big girls enjoy colouring so the crayons and colouring book went down lovely. I haven’t really tried Ella’s Kitchen foods before so I was excited to see if the girls would like them. The fruit pouches were definitely a hit and perfect for little snacks, whereas the bagged snacks (biscuits and crisp like bits) were not enjoyed by P1 or P2 as the flavours were a bit out there for them, however, P3 got stuck in creating a mess and loves them. All of the girls love the little snack bars though and they remind me of little flapjacks.