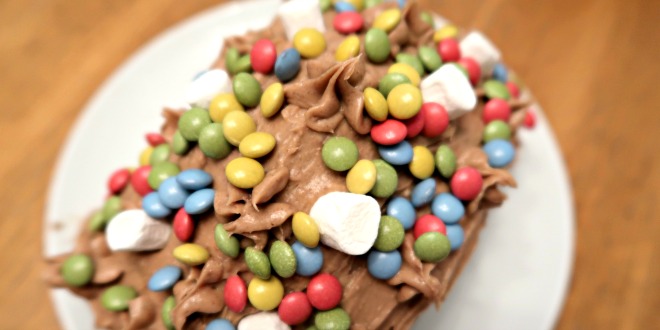 I know, I’m interrupting my usual schedule and bringing you a post on a Saturday. It’s for good cause, to celebrate chocolate, more specifically chocolate cake. The wonderful people at Num Noms UK challenged us to get chocolatey and bake a chocolate cake that is inspired by the Series 4 Num Noms. The weather has been awful, specifically on the day that P3 has off of nursery so we decided that would be the perfect opportunity to get baking. She was so excited to pop on her Num Noms chef hat and get to work. But first up we opened up the two blind pot Num Noms series 5. I had no idea what was inside these ones. I was so surprised to find nail polish Noms inside covered with a scented Num. P3’s face was just a picture, she was excited because she’d mentioned having her nails done earlier in the day, this was perfect. The smells were so strong too and honestly the first thing I said was “wow they’ve upped their game”. We then got to work making the main chocolate cake. We cheated a little bit by using the Dr Oetker Double Chocolate Bake In The Box Loaf Cake mix. Obviously the double chocolate chip was inspired by the Chucky Chip the Num. You literally have to empty the sachet into the box and add 130ml of milk, give it a stir and bake in the oven. It surprisingly takes quite a while, around 40 minutes in total. Whilst we waited for our chocolate cake to cook, we went back into the dining room for a mini spa day. In the blind bag pots we received two limited edition Polish-It Noms, one was from the Glitter section and the other from the Shimmer. Their names were Bubble Polish-It and Smores Polish-It. They are scented and honestly smell so delicious. Seeing as it’s National Chocolate Cake Day I wanted to make the icing super chocolatey. I made a classic buttercream frosting with a slight hint of coffee on top just like the Mocha Frappe Num we received. Once our chocolate cake had cooled down P3 got to work icing the top of the cake. I also have a squeezy icing thing that creates the different patterns so I made some flower decorations for the top with the buttercream. For decorating we decided to use Marshmallows like our Smores Polish-It Noms. P3 is quite particular about her placements and I was pretty impressed actually. P3 then used some Chocolate Beans to cover the cake, she used more than I expected but the outcome was really good. There’s a few sprinkle Nums that inspired this decision but I personally love the B-Day Sprinkled one. He’s cute and it’s also P2’s birthday very soon. I challenge you to create your own Num Noms inspired chocolate cake, because who really needs an excuse for chocolate?