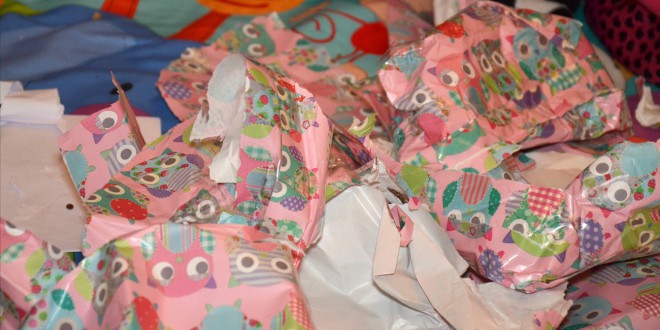 I sort of took a bit of an unexpected blogging break over Christmas. It wasn’t the plan and I wanted to blog but thanks to the newest update of the wordpress app, I’m unable to add featured images or any images without the app crashing. I wasn’t about to compromise on quality for the sake of a few posts so I took a mini break.

We’ve all been pretty ill this week. I really started to think Christmas was ruined. It started with P1 on Sunday night, she was then quite ill on Monday. It was passed onto me on Tuesday where I spent the day in and out of sleep or crying. I was so worried that I’d ruin P1s birthday by being ill.

Thankfully, I was feeling manageable for P1s birthday. Unfortunately, my Grandad didn’t and he couldn’t make the drive as he’d been sick that morning which upset P1. She opened up her presents and we got ready to go to the pantomime. Then my MiL and co came over to give P1 her presents. Last Christmas Eve I started a tradition of giving a few presents. I’ve seen some people that go way over board on Christmas Eve, this year I gave 3 presents each and a joint one. They had a Christmas book each, a milky way bear and their matching Christmas onesies. The joint present contained two Build-A-Bears. Christmas Day arrived and P1 was coughing a lot and P3 was very unsettled. We’re not sure whether it’s immunisation related (she had them on the 23rd, what a lovely Christmas present for her) or if she’s caught the cold thing that’s doing its rounds in our family. We spent the first half of Christmas at home unwrapping the mountain of presents.

This year, Santa only brought the girls a small selection of presents in their sacks that I’d homemade. P1 was very ungrateful last year. This year was a little different. She seemed to really appreciate her presents. P2 was in awe. It was her first “proper” christmas and she thoroughly enjoyed opening her presents by herself and getting Daddy to then fiddle about with boxes and strings. We then went to the MiLs for our Christmas dinner, more presents and lots of play. It was a really chilled afternoon and evening, we didn’t leave until nearly 9pm! This year we’ve all been super lucky with really thoughtful presents. Even the girls were not bombarded with random bits. I managed to tick off a few of my wish list items, like a gel nail set, new dinnerware and the best present ever, a new storage bed!!

Hubby and I stayed up really late Christmas Day sorting the pile of toys and getting rid of boxes. My gosh there’s so many boxes and wrapping paper after christmas!! I don’t feel at all overwhelmed by the amount of stuff we have. I really thought I would, but this year it all seems just right. I was so in the moment of it all that I forgot my big camera and didn’t capture hardly any thing that I’d planned to.

By Boxing Day, P2 had caught the illness. P1 and I was coughing continuously. So the day was spent being extremely lazy and trying to re cooperate. P2 spent two days just laying around.

Saturday morning we had plans for hubby to take the rubbish to the tip and then build the bed with my MiLs partner. It didn’t quite work out how we planned. The boiler stopped working and then the car stopped working. Thankfully the boiler was fixed on Sunday but the car is going to be tricky as it needs a new fuel pump which is going to cost us money we cannot spare.

Christmas was wonderful, magical and apart from the illnesses that are still lingering strong. But I don’t think 2015 is going to have a great start. Money is going to be tighter than tight.