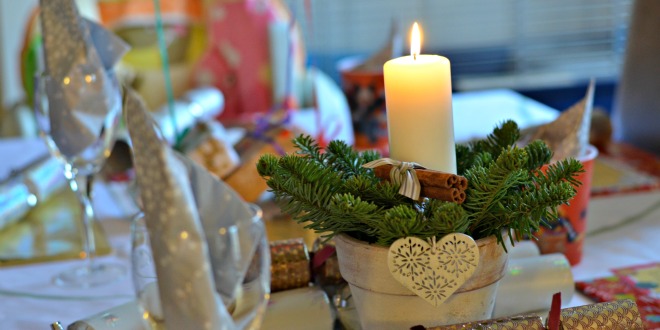 The build up and anticipation for Christmas this year was immense for me. For some reason it all felt so much more magical this year than any other year. I partly blame blogging for that as I am aware of other people’s traditions, decorations and stories that surround Christmas. Since last Christmas we’ve been saving our Nectar and Tesco purely to be our budget for Christmas. It wasn’t a huge amount, especially with three children to buy for, but it was the perfect amount. P1 and P2 had 10 presents each, P3 had slightly less as she’s younger and we thought she’d be more interested in the wrapping.

Just before bedtime on Christmas Eve felt really magical. P3 went to bed by 6pm so missed all the fun but P2 was so involved with leaving treats out for Santa. Her little face was just adorable to watch, her imagination running wild, and P1 drew a beautiful picture like she always does. After we’d read our Christmas story, P2 seemed eager to get to bed despite having a two hour nap in the late afternoon. All three were asleep by about 7:30pm. I struggled to get to sleep at bedtime and during the night when I was disrupted. I also woke over an hour before the girls due to excitement. Feeling like little kid all over again. They all finally arose at about 7:30am with P2 asking if Santa had been and we all hurried downstairs. It’s so clear that this year was the first proper year that P2 understands and has been able to get involved in all the festivities.

Santa had left them each a sack containing one toy, some chocolate, clothes and books. P2 got what she’d asked for, a chubby puppy and P1 got the Monster High Doll that she asked for. P3 was so overwhelmed by it all. She kept picking up her presents and handing them to her sisters or us to help her open them. Exclaiming “wow” every time she saw the toy inside. All three girls have been so appreciative this year and it has also made me realise that having three girls is fantastic because they all place with each other’s toys. Three time the fun. All the unwrapping, playing and laughing caught up to P3 as we enjoyed a chilled morning at home. She fell asleep upright which is very unusual, right before we needed to head to my MiLs. The invite to my own family’s little Christmas Day gathering had clearly got lost in the post this year, but I was so excited to get to my MiLs and be around the people that are always consistent. At my MiLs we had a really chilled afternoon. My MiL usually arranges some sort of activity or game for us to join in with but this year it was a little more relaxed. The girls were playing happily with their Uncle (hubby’s brother who is aged between P1 & P2) and us adults just plodded about whilst dinner was being cooked. It was a perfect day as everyone has been quite ill so the sort of break was very much needed. The girls had more presents to unwrap and P3 was really getting the hang of it. My MiL bought me a lovely new jumper, something I’ve been longing for, and some other really thoughtful things that just shows she knows me and listens to me. Hubby has said he will be buying me a new tripod for my phone after the new year which is super exciting. He wanted to wait just in case someone had taken the hint from my online wish list. Dinner was served late afternoon. A turkey roast dinner with sausages, ham and bacon. My MiLs partner always cooks some delicious dishes and I get quite excited when a roast is on the cards. We all sat together, the kids with special doodle placemats and everybody with crackers. I especially loved the candle centre piece. Dessert was Christmas pudding with Vienetta ice cream. We all then gathered round for some Christmas telly as we all tried hard not to fall asleep with full bellies. P3 began to get quite emotional as she’d only had a 30 minute nap just before midday then about 5 minutes in arms. So things started to feel a bit stressful and I decided it was time to call it a day. It was about 7pm so we/she did well! We ended the day with some birthday cake for our birthday girl. I realised after putting the girls to bed on Christmas Eve that I hadn’t done P1s cake. I felt totally awful. I’d hidden it so that she didn’t see it and the saying “out of sight out of mind” was so apparent. But she didn’t mind and we all sang happy birthday.

I’m writing this really late now, in fact I think it may even now be Boxing Day. I can hear snoring from hubby and P3. It’s peaceful and looking at the photos from the day make me feel so warm and emotional. I am so incredibly blessed with the people I have around me. We are certainly not perfect but it’s definitely days like Christmas that bring family together that help me to realise exactly what I have now. My beautiful brood are growing so quickly and I’m so proud of them.

All that’s left to say is that I hope you all had a magical Christmas. It’s time to think about New Years resolutions and goals now, and start preparing for Christmas 2016!!