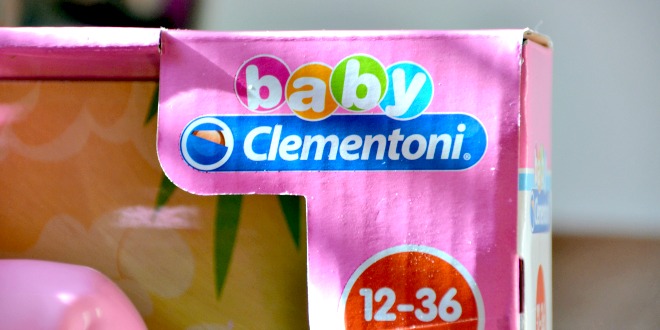 I have been invited to be a Clementoni Brand Ambassador which ultimately means we will be getting to try out some fun toys and let you all know what we think of them. We were sent our first package of goodies to try out a few weeks ago and inside there was a toy for each of the girls to play with. I am starting our role as ambassadors with our youngest daughter. P3 is absolutely obsessed with dinosaurs at the moment and so when she saw the Clementoni Baby T-Rex Pink in it’s box she squealed with delight. Inside the box there is the dinosaur toy and a little meat shaped rattle. Baby T-Rex has two playing modes; one where she is still with noises, and the second where she actually moves about and spins.

The Baby T-Rex is suitable from twelve months to around three years of age. So P3 is right in the middle of the age bracket. The toy definitely looks like a baby toy rather than an older toddler so I was worried that P3 may not find her interesting, but I was very wrong. P3 adores her and has had lots of fun playing. The Baby T-Rex has four buttons that can be pressed. Three along her back and one on her head. They have cute animals and numbers on as well as being different coloured too. These buttons activate different songs, sounds and words for your child to learn.

The Clementoni Baby T-Rex helps to teach your child Visual, Hearing and Tactile Perception, Eye-hand Coordination, Affection and Language. The rattle can be shaked to trigger the motion and sounds of Baby T-Rex which is lots of fun for a younger child too. The Baby T-Rex literally zooms off in all different directions and P3 had a laugh chasing after her. I actually love the Clementoni Baby T-Rex. I think she’s super cute and so much fun when in the moving mode. All three of my girls have had lots of fun playing with her on numerous occasions. You can buy Baby T-Rex in Pink or Green in all the major toy shops or online for around £17.99!

A brilliant educational toy for children. This helps to promote movement, language and hand-eye coordination. Super cute design and concept!

User Rating: Be the first one !
Share
Previous The Cheeky Elf Review
Next Clementoni Princess Magnetic Drawing Board Review