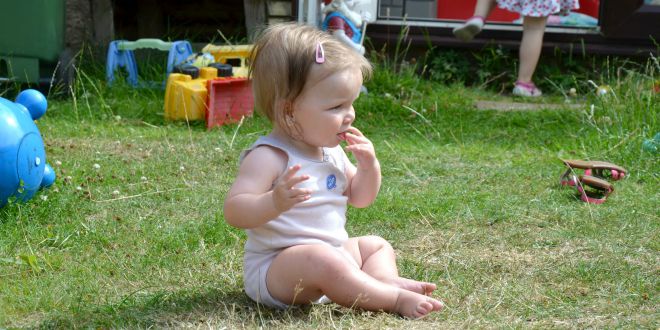 Climbing The Stairs At 10 Months

Since joining Gymboree two months ago I have seen such a change in both P2 and P3. When they first started P2 was so shy and got quite upset at times, P3 was barely sitting and couldn’t really join in too much. Now, especially in the past week I have seen the biggest changes in P3. Not only is she now crawling and cruising but she has started to climb things. It started with the slopes at Gymboree. She managed to get further and further. Then it progressed from there and she now climbs the more difficult slopes. At home I’ve seen the biggest change in her, where it’s not quite so safe to climb things. She’s managed to get on top of the mini kids arm chair we have upstairs and even on the Nuna LEAF swinging chair she naps in during the day.

P1 came running in to me the other day saying that P3 had climbed onto P2s toddler bed. I actually told P1 off because I was adamant that P3 couldn’t climb yet and that she must have put her on there which was really dangerous. I know now that I was wrong.

It’s quite scary. At 10 months old she has no awareness of dangerous or her own surroundings. Sitting back on the edge of the bed will result in a fall. She doesn’t know that. I feel completely on edge by her new found skill and the little adventures she is now undertaking. I can see damage in every direction. We’ll most certainly have to get rid of the Nuna LEAF and put it upstairs for naps now. We have also got to get the bottom stair gate back out. P3 is developing so much quicker than her big sisters. She is confident, strong and such a character already. I am totally gobsmacked if I’m honest and her baby days are suddenly nearing the end because I know she will be toddling around so quickly if she continues the way she is. P1 was a year old when she crawled, P2 one month earlier and P3 now one month earlier than that!

What age did your children crawl?