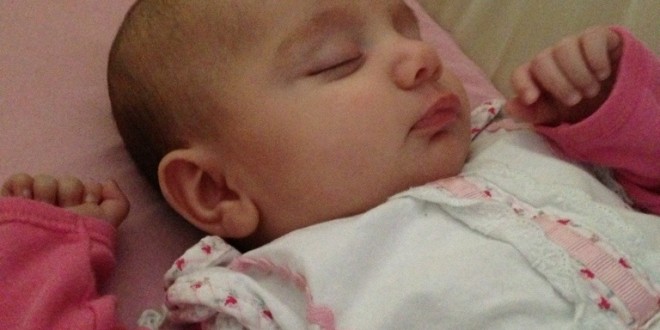 We put P2s cotbed up the day we moved back to my parents house. This was partly because we thought we would be having a premature baby but mainly because it was easier to get all furniture we needed put up before “stuff” took over the bedroom.

The cot was there acting as a dumping ground for three months before P2 arrived – it went from sky high, to clear and then back to sky high in a couple of days. When she arrived, we cleared it and it was ready for our newborn to use it.

I was adamant that we didn’t need a Moses Basket, so we didn’t buy one! P2 spent I think two nights in the cot before I got fed up with getting out of bed all the time. So we ended up in a routine of co-sleeping.

Which worked brilliantly with breast feeding. But I knew I wasn’t getting the right sleep. Even though she’s only ever woke at the most 3 times in one night, I was always half awake making sure I wasn’t rolling on her or that she’d slipped under the duvet.

So we made the decision to get a Moses basket. P2 then was put down after her last night feed, and she’d stay there until her next feed… but I’d fall asleep before returning her! Things have got better recently. She’s only waking once, around 3-4am, and I’m making a huge effort to stay awake most nights and return her to her basket. However, she’s rapidly growing out of it and that terrifies me.

I love having her close enough to hear her snoring, close enough for me to get her out and feed her without getting up, close enough to touch her. But most of all, P2 tends to choke on her fingers or where she hasn’t fully been winded, she’s frequently sick in her Moses basket. Like last night for instance. I was close enough to stop her from choking on her own sick. I grabbed her and I dealt with it. Simple. Not so simple if she’s the other side of the room!! Unfortunately, I can’t slow down P2s growing. She’ll need to be in the cotbed sooner rather than later, and I can’t do anything to prevent that. Except keeping her in my bed instead, which isn’t practical!

I can’t see a way of rearranging our bedroom either so her cot is closer to us. It would be far too much hassle for my OH.

So for now, the cot is cleared and I’ll try make an effort to put P2 in it during day nap times!