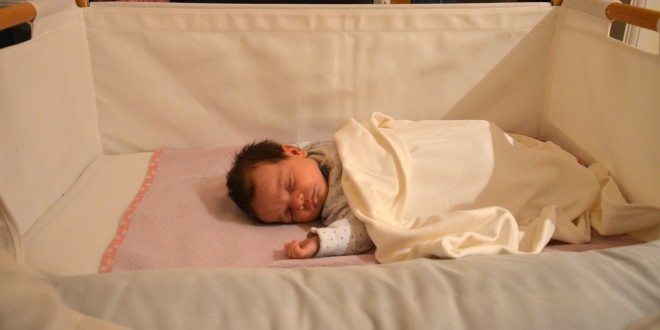 Co-Sleeping With My Third Baby

As a parent, we want what is best for our children. Of course we do. How we parent is largely influenced by our own upbringings and more nowadays by the internet. We have the input of every medically-trained professional under the sun telling us what is right and what is wrong. Ultimately, as a parent we know our children more than anyone else does and we can figure out what is best for them individually.

Whilst we co-slept exclusively with P2 at the beginning and she always ended up in our bed at some point in the night until just before her baby sister arrived. P1 did not co-sleep. Co-sleeping did work for us, it allowed us to get some sleep, more sleep than whenever P2 was in her cot or moses basket, but not full sleep because although at times P2 would stir just once in the night, I was awake every hour or so being poked in the eye or just generally checking she was still breathing and that one of us hadn’t rolled on her. Hubby had decided he wanted us to co-sleep with P3. I agreed but deep down I was dreading it. I wanted to be able to snuggle up to my husband in the night and not worry about us harming our baby. The decision did grow on me as ultimately we were getting more sleep when we co-slept than when we didn’t. Even the hospital leaflets were no longer against it. I was actually quite content with the idea of having my last baby so close to me. Thankfully, we were given a SnuzPod to review and this gave us the option to not co-sleep but allowed us to have her close enough to touch and hear her breathing. It meant I didn’t need to get out of bed to be able to feed her and care for her. It has truly been a life saver.

We have only co-slept a handful of times with P3 and that’s the way I intend it to stay. Last night was one of those times, and it brings me back to the opening paragraph of how parents know their own child best. Our household seems to be pretty snotty and coughing, so far I have only had the snuffles and nothing else, but all the girls and hubby have experienced temperatures and coughs too. P3 has been super unsettled at bedtime and the night before last she was awake on and off from 3am.

I didn’t want the same for last night, and when she’d stirred three times since I got into bed I knew we were in for a bad night. I brought her in the bed for cuddles, expecting her to fully wake, but instead she fell back to sleep instantly and was so peaceful. Hubby and I agreed that P3 was best to stay there and that I’d put her back in the SnuzPod when she woke next. That didn’t happen until nearly 5am!

Sometimes, we have to give in to things we believe are best for them. Parenting changes each and every day. I did what I thought was best for my daughters at the time and I’ll continue to do that for the rest of my life.