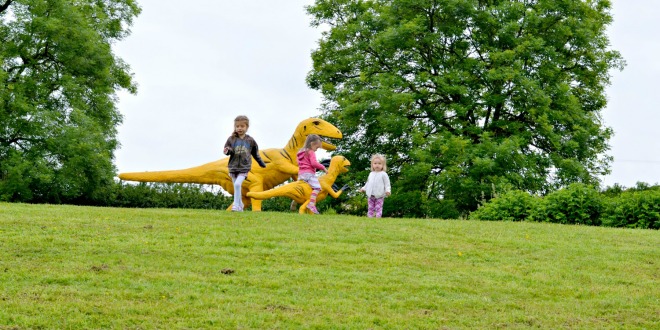 A Dinosaur Adventure At The Dinosaur Park Tenby

It was an early checkout at Bluestone last week and although you can stay on site until 3pm to enjoy all the facilities, we decided to make a move and Hubby researched some local things to do with the kids. The Dinosaur Park Tenby was just a 20 minute drive away and happened to be on our way home. My girls are a little bit obsessed with dinosaurs at the moment, especially P3 who watches YouTube videos of dinosaurs over and over. So as soon as she saw the cute yellow dinosaurs in the entrance she was shouting “dine-sore”.  We decided to venture in without a buggy as the plan was to wear the kids out for a nearly five hour journey back home later. The Dinosaur Park has an admission fee which is very reasonable and then you are given a few 2p coins to use on the unmanned rides. As it was term time we were the first to arrive and most of the rides were closed until 11am but this was absolutely fine as they have a dinosaur walk. It’s about a mile long through a pathed wooded area. They have lots of dinosaur statues to see with some well known ones and some I haven’t heard of. Some of them made noises which gave a really realistic exciting experience for the girls. The walk was the perfect time for us as when we got back round to the rides area it was 11am and some staff were present. We went on a go cart type ride first, some tractors and then bumper space cars which all needed 2p coins. The time that is lasts though was really good so we changed up a £1 coin to use and experience more fun. Most of the manned rides were unmanned as it was term time but it was easy to find a member of staff to open and supervise. In fact there was a particular younger male staff who was incredibly patient and so helpful throughout the day. Especially with P1 who kicked up a fuss at the top of the “Tubey” slide because she was scared, once she did it of course she wanted another go. He also opened up the “Bubble Ride” for the girls and they were in those round balls for a really good length of time. The whole park is so clean and well kept with such friendly staff. We went on the Safari which had a queue but we managed to get it all to ourselves. The man driving the buggy was so friendly and his voice was so calming. You could tell he was passionate about his job which made the entire experience amazing. We ventured into the soft play barn which again was so incredibly clean and there’s something for all ages in there. We ventured back outside and played on a few more rides before it started to rain quite a bit. It didn’t seem to phase the girls at all so we were out in the rain for quite a while before we decided enough was enough. We were all pretty soaked and P3 was getting a bit emotional too. I plucked up the courage to hand the staff at reception my blog business card and told them I’d be writing this post as we had such an amazing time.

If you are in or near Tenby, South Wales at all I would highly recommend a visit to The Dinosaur Park Tenby. We are so sad that it’s such a long drive to get to because we’d love to visit more often. It was seriously an amazing day out! Here’s a video of our day out:

Disclosure: This is not a collaborative post. We paid for entrance ourselves and enjoyed our day!
Share
Previous Insjo Saimaa Sweet Peach bagINbag Review
Next Jungle Craft #BostikBloggers