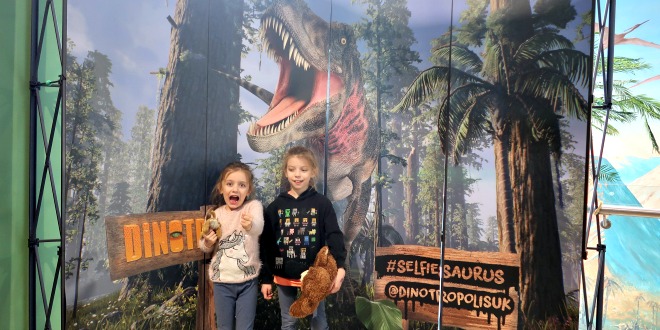 Dinotropolis At Bluewater This Half Term

It is nearly half term and although they are a great time to rest and recuperate, I always find school holidays a little daunting. I question whether I’m doing enough to keep their bodies active and brains learning. So I am beginning to plan activities for my girls to keep them occupied.

Bluewater is our local shopping centre. It is also Europe’s leading retail and leisure destination with over 300 stores and more than 50 places to eat and drink. What I personally love about Bluewater is that there is always something going on there throughout the year, especially for families. We have explored the year round brilliant Nature Trail, the summer time Bluewater Beach, and seen Santa at their Grotto and Ice Rink at Christmas time.

This half term there are activities that will entertain children of all ages, there’s Story Time with The Three Billy Goats Gruff, Gravity Trampoline Park, the Showcase Cinema, Pirate Cove and of course the Nature Trail plus so much more. I’m sure you can agree there is a lot going on at Bluewater and of course, it’s always nice to go shopping but even better if the kids get some enjoyment too.

We headed down to Dinotropolis for the very first time a few weekends ago to try out the new dinosaur adventure park. I created a video of our experience which I hope you’ll take some time to watch. I love creating videos for my YouTube channel as they give you more life like view on a place or experience.

Dinotropolis is a soft play adventure venue with interactive games and animatronic dinosaurs. There is also Raptor Racing karting, Discovery Cove arts and crafts, and Dino Jungle soft play. I was pretty much hooked at the idea of it being a dinosaur themed soft play.

We decided to visit as Dinotropolis opened, 9am. From experience soft play is usually much quieter first thing in the morning and during the very last hours of the day. I get a little anxious when places become too busy. The Dinotropolis is situated in the Plaza, very close to restaurants and Gravity.

When you enter through the themed dinosaur doors there is a buggy park and a flight of stairs. Dinotropolis is up the stairs. Everything is Jurassic themed with plants, dinosaur wallpaper and music setting off the atmosphere. There’s a pterodactyl hanging from the ceiling above the entrance. The girls were really excited, pointing and talking about what they could see. I think it was very sensory overload!

There are different entrance price options. The cheapest option is for entrance to the venue only, it costs £12 per child (age 19 months to 18 years), this is called the Explorer Pass. The Discovery Pass costs £15 per child which includes the Dino Escape Challenge and the Ranger Pass is £20 which is everything included plus a meal deal for children. What I was a little miffed about was that adults also have to pay, £5 each! I really don’t agree with paying to enter soft play as an adult, but we could get either a hot drink or bottle of water in the Fossil Cafe.

Elsa has always had a real thing for dinosaurs so seeing the two giant animatronic dinosaurs was very exciting for her. Eva loved the triceratops, she said that they are one of her favourite dinosaurs. After reading another review of dinotropolis before we visited, I was very pleased to see the dinosaurs had a fence around them protecting them from mini humans and their destruction.

We headed in to find a good spot to pop our belongings and possibly get a table. We found a table upstairs in a cosy nook. There were lockers for belongings but we ended up putting our things under our table. I loved that there was soft play entrances both on the ground level and up on the top level too.

The soft play area is three floors tall. It is all dino themed as you can see from the photos. There was Jurassic music playing. There’s also a smaller area for younger users but the soft play is really easy to manoeuvre for younger children and also tall enough for adults to also join in. It is quite nice to explore and pretend to be a child for a few hours.

Ultimately the soft play area is much like the usual soft play. There’s things to climb over, climb under, ball pits, slides and more. If your children are anything like mine, they’ll be more than happy running about for hours on end in the soft play alone.

What makes Dinotropolis an adventure park is the other activities available. The girls quickly spotted the Raptor Racing, karting around the underneath of the soft play. I loved how there were different kart sizes which meant even little Elsa could ride by herself. They spent ages racing each other, laughing and screeching.

We then went to explore the Dino Escape Challenge. We’d read that it was a room of lasers that you have to dodge without waking the sleeping dinosaur. The room was really dark, Elsa found it a bit creepy but the other two were quite excited and definitely up for the challenge.

It looked like great fun but I definitely didn’t think it was worth the added £3 on entrance fee per child. It was a 3 minute activity that really should of been included as part of an entrance fee. It did have a staff member supervising continuously which may be why there’s a fee. As Dinotropolis became more busy, the queue for the Dino Escape Challenge room did get quite lengthy. After the Dino Escape we headed round to the Discovery Cove. I do love that there are other things apart from the soft play to entertain children. This area has lots of interactive dinosaur fun. Discovery Cove is included in your entrance price and you can pop by as many times as you like during your visit.

The girls quickly got their hands into the sand. It is an augmented reality sandpit where the kids can move the sand around to create lakes, volcanoes and land. There’s dinosaurs roaming around. It’s honestly quite spectacular technology. I loved that there were stools provided so that smaller or younger children could also get involved with the fun.

There is also an area where children can build either a triceratops or a T-Rex using foam body parts on a base model. This was actually quite tricky for Eva who is 6 years old but Freya enjoyed doing it. Elsa, being the sand lover she is, really enjoyed digging for fossils in the sand pit and finding bones.

We all got involved in the Create A Dinosaur area. There were several tables filled up with colouring materials and sheets to design your own dinosaur. Hubby and I were definitely enjoying this just as much as the girls were! The staff were really good at replenishing the sheets and keeping everything tidy.

Once your dinosaur is completed, you take it over to the scanner where it magically puts your dinosaur on the screen to roam around with other created dinosaurs. It’s really awkward to explain so I’d definitely suggest watching my video to see it in action. As a family we spent quite a while here. Whilst the girls ran off in the soft play, Hubby and I placed our meal deal order. As part of the higher cost entrance, children get a meal deal. It’s one hot meal basically with a drink. I’ve popped a photo of their menu from that day below so you can see prices and what sort of thing is available.

The wait time for food was about twenty minutes. The food was actually really good, the usual quality for soft play and all three girls enjoyed their meal. We had ordered chicken nuggets and fish fingers, all with chips and baked beans. The girls also had fruit shoots but there were other options available. Hubby and I also enjoyed a hot chocolate each. As we were eating the staff did actually call out our time slot to leave. You only get one and a half hours in Dinotropolis, which is the worst part about the entire venue. It is not enough time to factor in eating and for the cost of entrance, it’s just not good enough in my opinion. Our day out would have cost our family £70, for an extremely short amount of time. To put that in comparison, we could of had a full day out at a local animal park with a dinosaur experience there for around £50 as a family. It’s a huge difference.

We also had to dodge the gift shop as we exited. Never a great way to end a day out. We did have a lovely time whilst at Dinotropolis. It was clean, the toilets were clean and the facilities were so much fun for the children. Adults can also get involved which I think is lovely. If you want to find out more head to the Dinotropolis website.

Don’t forget to check out what Bluewater has going on during half term. There’s something for everybody.

Disclosure: This is a collaborative post. We were gifted our entrance to Dinotropolis. I have full editorial control.