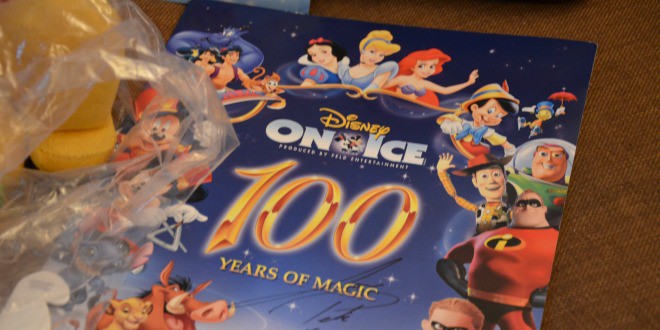 On Sunday we attended Disney On Ice’s 100 Years Of Magic at the O2 arena. It had been arranged for a few months so I was extremely excited about going for so long. I used to ice skate during my teen years. Anyway, we’d decided to take just P1 and P2, leaving P3 with my MiL. We wanted to spend some quality time with the both of them without being so outnumbered. At 10:25am we got on the train. I’d packed 1 bottle of milk for P2, sandwiches for the girls, my juice plus powder with measured water separately. I had orange squash, nappies, wipes, a dummy and even P2s antibiotics.

P2 ran out of milk. She then lost her dummy. She didn’t want to be in the pram or on our laps or walking or sitting on the train seat. Terrible twos have certainly crept up on us suddenly. It then didn’t help her mood that we had to wait for over an hour at the box office as there was some complications with the tickets resulting in us not getting seated until 20 minutes into the performance. We were literally ready to go home by this point.

Thankfully, the show helped lift our moods. It was full of all the well known Disney characters such as Lion King, Nemo, Toy Story, Stitch and of course the Princesses. I had hoped that maybe they’d surprise include the Frozen lot but unfortunately not this time. That’s for the next show. What I loved was that each Princess came on with their Prince.

We didn’t have the best of seats but you could still tell that the costumes and props were so well designed. The show was breath taking from start (our star) to finish. The girls were entertained the whole time. When looking back on our photos P2 says “scared” when she sees the sharks from Finding Nemo and P1 loved the characters from Beauty and the Beast.

Although we didn’t pay for these Disney On Ice tickets, I have paid for previous shows and the team at Disney have never failed me for amusement factor and magical factor. I really want to go and see the next Disney On Ice show which is the Magical Ice Festival although I wouldn’t go with P2 until she’s much older!

A great experience for all ages! A spectacular ice show full of well known Disney characters.

User Rating: Be the first one !
Share
Previous Siblings January 2015
Next “I’ve had nearly two years of broken sleep”