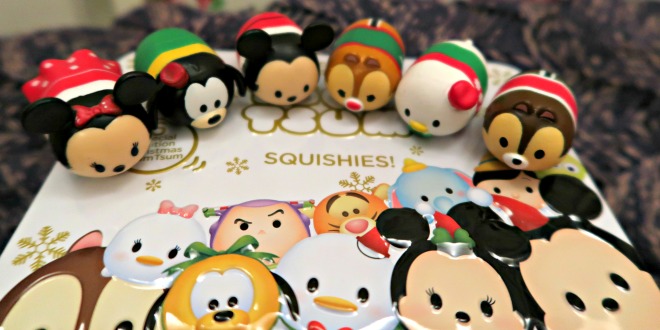 Christmas this year felt super special. We had picked gifts for each child with so much love and attention. I think they were all pretty pleased and our lounge looks like a toy shop explosion, but one thing my girls really love are the small collectable toys. We had never experienced the world of Disney Tsum Tsum until we were sent the Tsum Tsum Squishies Series 3 Metallics 4 pack set and the Special Edition Christmas Tin. I have to admit that I have never seen Tsum Tsum Squishies before and sat just staring at them for quite a long time to figure out what they did. It turns out that they don’t actually do anything special, however I’m not sure I really mind because they are so flipping cute!! We are huge Disney fans in our house, with two of our children being named directly from Disney films so to have some little Disney collectable toys that don’t take up much room is brilliant.

I was so excited about Christmas so having some cute Christmas themed Tsum Tsum’s was really exciting. I am fully aware that this probably sounds pretty lame on my part. The Tsum Tsum Squishies are stackable, collectible and are great for swapping with friends if you have doubles. The Special Edition Christmas Tin is a brilliant size to pop other Tsum Tsum’s in too. It comes with 6 of the very well known Disney characters; Mickey, Minnie, Goofy, Donald, Chip and Dale. They are all wearing festive jumpers too.

Then we have the Series 3 Metallics 4 pack set. You are able to see three of the included Tsum Tsum’s with an extra hidden one in the pack too. As the name suggests, they are metallic in appearance. I especially loved the Simba from Lion King as this is one of my favourite childhood Disney films.

I actually love the Disney Tsum Tsum Squishies. We gave these as a Christmas present to our youngest so that now she has her own little thing to collect. I love listening to her little imaginations as she plays with these. I’ve shown her how to stack them and this is what she loves to do the most. I also love that they don’t take up much space.