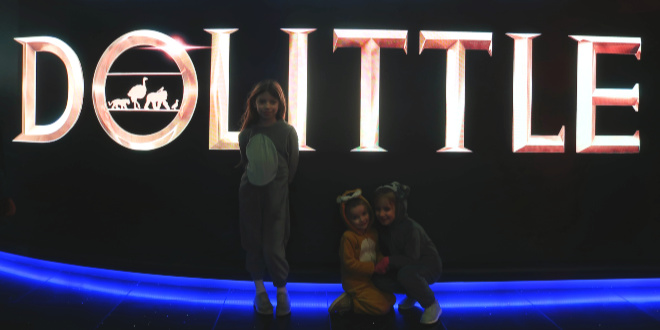 The girls have been asking us to take them to the cinema for ages and what better way to fulfil that request than a trip to London for a film premiere! We had been invited to Cineworld in Leicester Square for the UK Premiere of Dolittle last weekend and we had to dress up as animals.

The invitation didn’t specify whether it was everyone or just the kids, so I opted out of being dressed as a furry friend and instead, the girls popped on their animal onesies. It was probably a blessing in disguise at the weather was freezing, their onesies kept them snuggly and warm during our journey by train. I love London in the mornings when there are not too many crowds and it’s all relatively peaceful. We instantly knew we had arrived at the correct location as we joined a queue of mini animals and their grown-ups.

A red carpet had been laid and we made our way into Cineworld for the pre-show fun. There was a fancy atmosphere, the staircase had clips of Dr Dolittle riding an ostrich and the girls were in awe by all of the lights and sparkles. I’ve been to a few film premieres and I have to say that this one was brilliant in terms of the fun activities before the film. There was little games to take part in, photobooths, dress-up outfits, crafts, pastries and amazing potted fruit. I was impressed.

After a quick dress-up, a visit to the toilet and getting some snacks to eat, we made our way into the IMAX cinema theatre. I don’t think I’ve ever experienced an IMAX before and was overwhelmed at the sheer size of the screen. We found some seats at the end of a row so we could escape with Elsa if we needed to (she has some sensory issues sometimes).

There were a few members of staff conducting a game of Dolittle Twister at the front of the cinema. Freya and Eva were the first to volunteer to play. It was a genius way of keeping the children entertained whilst we waited for the stars of the show to arrive and the film to begin. They even won a cute Dolittle teddy each which we’ll cherish forever. After a fun game of Twister, we got cosy and waited for the film to begin. We had been prewarned that Robert Downey Jr. (Dr John Dolittle himself) and Emma Thompson (the voice of Polynesia the parrot) would be there to announce the film, however, we didn’t expect to see some of the other cast members too.

There was Carmel Laniado who plays Lady Rose in the film and wore the most stunning white dress, then there was also Harry Collett who plays the self-appointed apprentice of Dr Dolittle, Tommy Stubbins. Tom Holland who is the voice of Jip the dog in the Dolittle film arrived with his beautiful dog Tessa. Lastly, Robert Downey Jr. came out alongside his beautiful wife Susan who was the producer of the film. Of course, the best part of the entire time was getting to see the film itself. The Dolittle film is a reimagination of the classic tale of a man who can talk to animals. Dr John Dolittle is a veterinarian who was created by author Hugh Lofting. This enduring character has featured in a few films over the years.

This specific reboot follows Dr John Dolittle who lives in solitude behind the walls of his manor in England. The only companionship comes from exotic animals that he can speak to. Young Queen Victoria becomes ill, and the film follows Dolittle, Stubbins and an array of characters as they go on a quest to heal the Queen.

This has got to be my favourite adaptation of the Dolittle character. Robert Downey Jr played the part perfectly and suited the role. I am not a professional film critic, just the mum of three daughters who enjoy watching films, but I can truly say that all five of us were in hysterics the entire film. The humour was understood by even my five year old yet enjoyable by adults too.

There wasn’t any scary moments in this film so it could be watched by literally all ages. I loved every single character and felt that they had put a great effort into creating personalities for each animal and making sure there was a story behind each one. For example, the Gorilla struggled with anxiety and Dolittle helped him overcome that in the film. Going to a movie premiere is my favourite way to experience the cinema. I love the atmosphere so much. As the film ended everyone applauded. It was the perfect family-friendly watch, truly lighthearted and had some great storylines.

Dolittle is out in cinemas from the 7th February 2020 and I’m so excited to see what others start to think about it too.

Disclosure: This is a collaborative post. We had been invited along to the premiere with no obligation to share our thoughts.