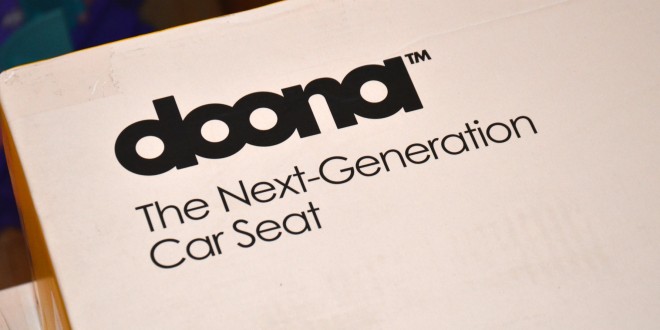 Rewind about 6 months ago and I was sat having a conversation about prams and what we’d need for our new arrival. I’d suggested someone should invent a car seat that had wheels because that would just be totally ingenious for me, a 4ft 8in mum who struggles to carry a carseat without bashing it against my body and not giving a very smooth ride. I remember quite clearly my hubby laughing at this idea of mine.

Then I received an email with the chance to review exactly that. A car seat on wheels. The Doona. I laughed hysterically and showed the email to hubby. I needed this in my life and it was about to make everything so much easier.

When it arrived it was all fixed together already. I had imagined it coming in lots of pieces but I suppose thinking about it this wouldn’t meet safety standards as it potentially wouldn’t get fitted properly by various people.

On first glance our initial impressions were that the carseat was certainly wider and quite obviously bigger than the normal Maxi Cosi that we have and after measuring it, it is wider by about an inch. We were a little concerned that we may not fit it in the car alongside the other two car seats we have which are rather chunky too. We were sent an Isofix base which is fantastic as we would normally use isofix, however with three children’s seats now it just doesn’t fit. The fact t it’s got the option to have either isofix or seatbelt is definitely a plus point though.

The car seat has a five point harness which is easily adjusted like a usual carseat. The one thing I was really pleased about is the padding inside for younger babies, it is made from Bamboo and it so squidgy and soft that I’m actually quite jealous of P3! We have also been sent some accessories; raincover, bag and there’s also a seat protector for the car. These I think will come in handy when getting full use out of it in both carseat mode and stroller mode. We’ve had a little go indoors and P2 certainly thinks it’s fab which adjustable handle bar although I definitely think it needs another one or two height options; one between the current and one slightly longer as hubby is 6ft and I’m 4ft. When I wear my heels, which is the majority of the time, then the height is not an issue but if I want to wear flats it is slightly too high. The breaks seem a little odd; one side is red the other green, for stop and then start. I’m not sure if I’ll get a bit confused with this.

I am seriously excited to start using this and we’ve decided to ditch our old car seat in favour for this one. It has the promise to make our lives a lot less messy.

I have been asked to do a three part review of the Doona so please check back for further reviews, I will link them to here. You can purchase a Doona for yourself for £299.99. It comes in five different colours; Storm, Night, Love, Dune and Sky.

Ingenious invention that every new parent should have in their lives.

User Rating: Be the first one !
Share
Previous “Infacol has certainly saved my sanity!”
Next “we have to stay in hospital for the next 48hours”