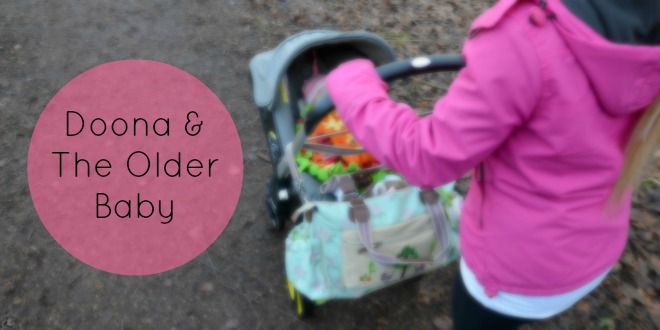 Lately, as I’ve been watching my chubby munchkin grow and thrive I have been wondering how we are going to cope without our Doona. I’m sure that she has plenty of time left in the Doona seeing as it’s weight limit is 13kg and P2 has only just hit that herself but the Doona has become a staple part of our daily life and not having that there is a little nerve racking.

For those of you that haven’t read my initial thoughts and how we’ve used it for our newborn days then head over there. Basically, the Doona is a car seat that turns into a stroller. Designed specifically to improve mobility solutions for parents in and out of the car. It’s the first in its kind.

With P3 now nearly 9 months old and weighing 15lbs she is a great lump to carry about. The seat itself, wheels and all, weighs 7kg and is actually quite bulky but thanks to the wheels which are so easily unfolded, see my video demo, getting out and about has never been so easy.

The Doona has had a bit of stick lately in the blogging world. Some people are concerned that parents will end up using the Doona mainly as a pram and therefore the child being put at risk due to being in the car seat for longer than recommended. I can honestly say that I have no concerns in this at all. I use my Doona every single day but that doesn’t mean she spends too long in it.

The Doona has been tested to meet the stringent European and US standards for Car-Seats, Strollers, Reclined Cradles (EU) and Hand-held Carriers (US). Doona is the ideal solution for air travel  and it has been certified by the US and European authorities for air travel. The Doona also has an orthopaedic back rest and padding, coupled with the shape of the shell, provides maximum comfort and safety for infants

Like I said previously, the Doona has become a firm part of our daily life. P2 is walking more and more these days and with play groups and Gymboree being within walking distance, more often than not I’ll pop P3 into the Doona to do the 5 minute walk. The Doona is super easy to manoeuvre with just one hand meaning I have one free to hold P2s hand. She has also frequently pushed P3 herself by putting the handle to its lowest position.

I have had an increase of blogging events to attend and most I opt to go with just P3. When I do this, it’s really easy to just use the Doona to travel on the train because you can fold down the wheels and carry her up and down the stairs. Travelling with the normal pram can be pretty stressful especially when alone and no one wants to help you up and down the stairs. The Doona solves this completely.

I recently used the Doona to attend BritMums Live and I’d obviously not been alone in my thinking as my two blogging buddies Laura and Kerry also used their Doona’s to make travelling easier.

My Doona is starting to wear a little. The wheels squeak and the wheels are looking a little worn but as an overall, it’s wearing pretty darn well! The Doona costs £299.99 and there are so many accessories that make travelling even easier. It’s completely worth the money and I would recommend this until my face went blue. A necessary parenting item to make travel easier for parents and less stressful. Most importantly comfortable for baby.

User Rating: 4.7 ( 1 votes)
Share
Previous What We Are Reading
Next “We survived the hottest day of the year!”