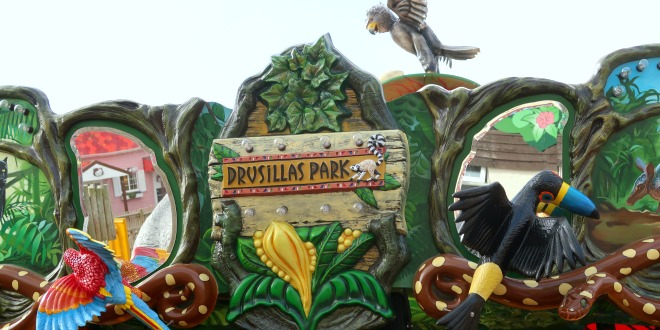 Last weekend my family and I was invited along to the launch of the new Rainforest Carousel at Drusillas Park. We had never been to Drusillas as a family and the girls were very excited for a brand new adventure.

Drusillas is in East Sussex, very close to the South coast. It was really simple to get to and we managed to arrive early for our day out. Drusillas is widely regarded as having the best small zoo in Europe. We also knew there were some rides too. Hopefully something for everyone. I wanted to share our experiences from our recent day out and hope you enjoy this blog post! We arrived at opening time where we were greeted by the Media team. We had our hands stamped and was then directed towards the Rainforest Carousel. I recognised another local blogger who I’ve met and admire there, so I said my nervous “hello” as we walked round.

If you want to skip the zoo and head straight to the Rainforest Carousel, you turn right at the entrance instead of turning left for the zoo route. You cannot miss the carousel. It stood in the sun looking very majestic, shiny and new.

The queue line has a very handy chart of all the animals you are able to ride on board the carousel, including animals like a sloth, squirrel monkey and butterfly. I was definitely impressed by the amount of animals on offer. The animals are all suitable for adults to ride, you can ride alone from 105 cm tall but there are also animals such as the crocodile and dolphin that can fit two people on. The animals felt really sturdy and the detail of artwork to make them look realistic was astonishing. There’s also a turtle that is designed for wheelchair users and a snake basket for young babies who need to be on laps, they’ve thought of everybody!

There are loads of animals on board so I can imagine the queue time being relatively fast moving. The Rainforest Carousel was closed to the public in the morning so it was easy to get on and off, we then experienced it during public time to see how busy it was, we only had to wait about five minutes.

The Rainforest Carousel rides really smoothly around a mirrored centre, with Jungle music in the background. Elsa definitely enjoyed it the most but actually Freya, who is ten years old also loved the Carousel. It’s a cute ride and a brilliant addition to Drusillas Park. As a child I always loved visiting our local zoo. I knew that Drusillas was a smaller zoo than my childhood one, but I was so impressed at just how many animals there were to see. There are actually over 100 different animal species. It follows a Zoo Route, the route feels like it just keeps on going with so many different animals popping up.

We have visited zoos before where the animals have all been a little inactive. Nearly every animal we came across (the nocturnal ones were obviously sleeping) were active and some even coming up to the glass for some attention. I loved the bat walk through enclosure, and also seeing a sloth high above my head. Honestly I may sound a little pathetic but I was in awe! I also loved seeing my girls faces light up when they saw certain recognisable animals. Things To Do On Your Way Round When you first enter Drusillas, you can pick up an Animal Spotter Book and a Zoolympics Challenge Record Book free of charge. As you make your way around the zoo there are different stamps to put in, different activities to complete to see how your skills match to other animals.

I love that there’s lots of things to do for children as sometimes seeing animal after animal can get a little boring. These short but interesting challenges help them to learn about the animals and keep their attention too. After finding your way around the Zoo Route, you are expelled into the play area section of Drusillas. It’s enormous and very easy to loose sight of your children. I went around with Elsa the first time to see how well she could navigate the equipment and then I joined Hubby for a brief sit down. There is also a smaller area at the back for younger children.

There is loads of things to do including a splash park for the brave ones, hamster wheel, rather difficult zip line, boat swings and obviously a giant play structure. My girls were honestly having the time of their lives. We returned to the play area twice during our day out.

There’s also a good sized indoor soft play. Elsa made a little friend in there, Eva enjoyed climbing the snake slide and Freya raced around playing hide and seek. It was a good chance to warm up, grab a drink and let our girls entertain themselves for a while. As with all theme parks or attractions, the food at Drusillas was quite highly priced for the quantity and quality received. We had a Cheese Burger meal and a kids chicken nugget meal, both with drinks, and it came to around £14. There was very little chicken nuggets in the box and the burger was quite basic. Maybe that’s me just being fussy.

There are several places throughout Drusillas to grab some food or a drink. There’s also vending machines with snacks and drinks dotted about the zoo too. I was pleased to find the Safari Express Train was free as part of your entrance fee. They run frequently throughout the day and we managed to hop on for a ride nearer the end of our visit. The carriages were spacious and it took you on a short loop around the play area with funky music and lovely views.

I think it would have been better with some commentary about animals or something, there were signs with jokes on the way but younger children cannot read them. The rides were definitely what Eva was most excited about. We first hopped into the Go Safari section where there are two rides; Flying Cheetahs and The Hippopotobus. The Flying Cheetahs ride seats up to four people per cheetah (2 adults and 2 children), children under 120cm must be accompanied. It’s a ride that goes round in a circle and then you can go up in the air controlled by a button. Freya and Eva loved soaring high whereas Elsa stayed low to the ground enjoying the smoother ride.

The Hippopotobus had us in fits of laughter. If you watch my video below you can see why. We always have the rules that we try something once, if you don’t like it you don’t have to do it again. Freya was really excited to try this ride, hopped on a little nervously but she was ok. Then the ride began, it went up and as it came back down again she screamed. You can see the fear in her eyes and hear it in her voice. Straight after she was fine. Children under 90cm must be accompanied by an adult so it’s not a super scary ride, Freya just doesn’t like the feeling of leaving her tummy in the air. However, Eva rode this ride again and again by herself and loved every second! Hello Kitty Secret Garden was such a cute little area. There’s a car ride which Elsa adored and the typical Teacups too. The girls loved this area of Drusillas as they could all do each ride, except the Hello Kitty Hopper Ride as obviously both Freya and Elsa were terrified. The rides are all included in your entrance fee. We nearly didn’t do the Eden’s Eye Maze. I usually avoid mazes, they seem to take forever but for some reason I felt like we should do everything at Drusillas. I’m so glad we did because this was a real treasure of adventure. You have to follow clues to find the core of Eden’s Eye. There’s lots to see, hear and do on the way and I’m not entirely sure we saw all of it.

Here’s the video I created from our day. It gives a real life experience of our day out and it’s quite a lot of fun to watch, but then again I am bias. I hope you enjoy it and please don’t forget to subscribe to my YouTube channel.

I will start my last thoughts with a bit of a negative but I promise to end with a positive.

There’s a section in Drusillas where the things are chargeable extras. Panning for gold, Hello Kitty Parlour, Dino Dig and a few other things I can completely understand the extra cost and are a common chargeable thing.

However, specifically I was pretty surprised that the inflatable slide was chargeable. It wasn’t cheap either around £5 a child so about £15 for our family. Our girls are very good when we say no, I can imagine lots of families feeling obliged to pay the price for tickets to ride. If you count in the cost of entrance to Drusillas plus the extra cost for the slide and possibly food, then the day out becomes rather costly. We have been to attractions that offer inflatable slides or bouncy castles free of charge and I feel this works so much better. Of course I do understand they have to make money somewhere.

Right, the positives. We had an absolutely amazing time at Drusillas Park for the opening day of their new Rainforest Carousel. It was our first visit and we spent the entire day there. I’d highly suggest doing the play areas first and then the zoo in the late afternoon. We went round the zoo area for a second time in the late afternoon and had it to ourselves as everyone had made their way to the play areas by then.

I’d highly recommend a visit. We honestly had a fantastic family day out! We hope to return in the summer. Disclosure: This is a collaborative post. Our entrance was gifted so we could attend the launch of the Rainforest Carousel at Drusillas.