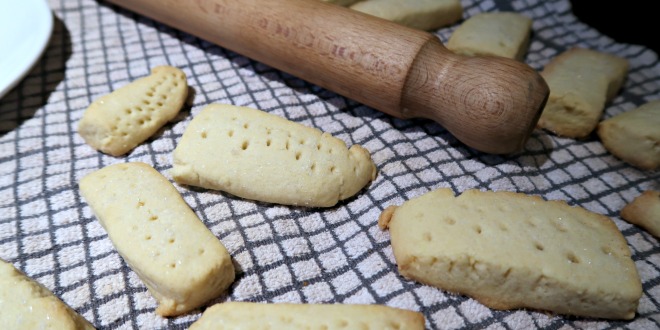 Now that the Christmas and New Year excitements are over, it’s time to settle into a little bit of a routine again. P2 had been off of nursery for a full month and during that first week of January I could tell she was a bit bored and I quite frankly was frustrated by all the demands and emotions. On our last weekday with her home, I decided to make something totally different with her. So we baked some Shortbread Fingers. I was really shocked at just how easy shortbread is to make. It’s three ingredients. That’s it:

55g (2oz) of Caster Sugar, plus extra to sprinkle on top

The method to making these are very simple and even two little people got stuck in and pretty much make these shortbread fingers by themselves.

1) Preheat the oven to 160C and line a baking sheet or grease it.

2) Mix the Butter with the Sugar until smooth and creamy in texture. Then gradually mix the flour in until it forms a smooth ball of dough.

3) Roll out the dough until around half to one centimetre thick. Cut this up in fingers or rounds. Place these on the baking sheet.

4) Sprinkle some extra Caster Sugar over the fingers. Then poke little holes for decoration. P2 really enjoyed this part. Pop them in the fridge for 20 minutes before baking in the oven for 15-20 minutes.

5) Once a pale brown, take out of the oven and leave to cool. It was a really chilled out activity to do on a boring, cold winters afternoon. It was very easy to put together and the outcome was delicious. P2 is known for enjoying baking but not actually liking her creations. Well this Shortbread recipe was a real winner for her, she had quite a few and so did the other two too. I hope you’ve enjoyed this recipe, I have a casual video on my YouTube channel with a step by step demonstration so definitely head over there.