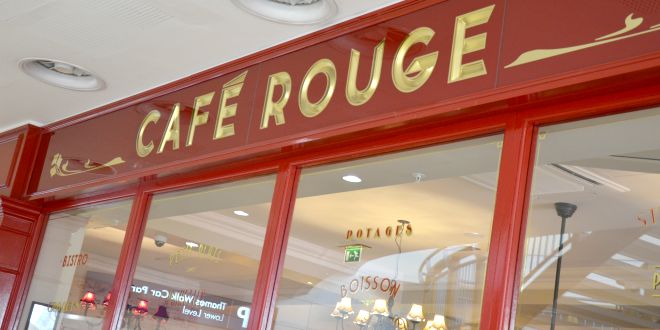 Eating Out With Kids At Cafe Rouge Bluewater

We were invited along to try out the new kids menu at our local Cafe Rouge last weekend. I’ve only ever experienced a breakfast at Cafe Rouge whilst holidaying in CenterParcs so I was extremely excited and totally nervous about dining out with all three children. Going to a restaurant is certainly when hubby and I feel the strain the most.

Our local Cafe Rouge is in Bluewater Shopping Centre, we arranged to go on a Sunday which was really handy as Monday was my MiLs birthday. We arrived at 10:30 not realising that the shops didn’t actually open until 11 so we had a wander around the shops, the girls loved bounding around Victoria Secrets and then we got some bits for my MiLs birthday tea. The girls also had a go on the trampoline things which is something we don’t usually do.

We weren’t due to have our lunch at Cafe Rouge until 1pm but we were done shopping by 12 so went to see if they could fit us in a bit earlier. The staff were very accommodating. We were asked to leave our pram, which we’d switched from the double down to the Doona for the restaurant, in a little buggy type park inside the restaurant near the toilets. Then we were seated.

We were offered drinks, some bread and ordered the girls starters really quickly. I was so impressed by the starter quality for the children. It was warm fougasse finger & crudites which for non-french speakers is a warmed mini baguette, carrot sticks, cucumber and cherry tomatoes with a tomato dip (not ketchup).

The bread went down a treat with the girls and P1 got stuck in with the carrot and cucumber sticks as did P3, however P2 is more of a fruit girl and just ate the bread. I do feel that having a starter on a kids menu is not the best of ideas in all honesty because their little tummies are so hungry that they fill up on the starter and then can’t manage the mains.

We let the girls pick their own food from the menu. So their choices were based purely on things they thought they wanted rather than us picking something we knew they would 100% eat. There are seven options on the kids menu; Poulet Ooh LA LA (chicken breast with veg), Poulet Goujons (chicken goujons with chips and veg), Le Burger (4oz burger with chips), Fab Fishcake (salmon fishcake with chips), Bangers Et Mash (2 sausages, mash, gravy with veg), Pasta (pasta with either macaroni cheese, pesto or tomato sauce), Petit Croque (cheese and ham toastie with chips).

P1 chose to have the fishcakes and P2 had the burger. Personally, I would have picked the sausages or the chicken goujons for the girls but I wanted them to have flexibility over their food this time. The food did not take long to arrive. The waitress was focusing on the kids food coming out quickly which I’m assuming was to make it easier for us to entertain them. The fries were a little salty which I thought was a bit odd for a children’s platter but they were gorgeous, some of the best tasting chips I have ever tried. The burger was a little dry and P2 didn’t like it but P1 enjoyed her fishcake even though it was a little different to what she was expecting.

I ordered the Demi Poulet (half-roast chicken marinated in thyme, garlic and black pepper with wild rocket, frites and thyme jus) and Hubby ordered the Poulet Breton (roast chicken with mushrooms, courgettes, leeks, herb wine sauce and mustard mashed potato). Although with the slight issue of not being French, the waitress brought out a seabass dish which she then changed. It’s always nice to actually see what they do in that situation and the waitress was very professional although did act slightly annoyed for a little while after.

The food was lovely and presented well. I certainly think more veg should have been included and not charged extra considering the price of the dish to start with. But overall we had a lovely meal especially as P3 fell asleep and we were able to pull the Doona up to the table and let her snooze in there. At the start of the meal the kids were very hyper and not particularly listening to us, but they mellowed down as the meal went on. We were asked frequently if we were ok and did we need anything by the waitress.

We never normally have dessert when we eat out. Usually by this point we are pulling our hair out and screaming for it all to be over but with P3 asleep and P1 and P2 happily colouring and munching chips we decided to indulge in the dessert menu. The kids menu had a lovely little selection; Fresh Fruit Salad, Ice Cream (a huge choice of: vanilla, chocolate, strawberry, tarte tatin, chocolate & raspberry or salted caramel with a choice of popping candy, marshmallows or jelly beans), Fruit Ice Lolly or Profiteroles Chocolate Crepe.

We stuck to just some simple ice cream, the kids shared their marshmallows and jelly beans with each other which was very sweet (excuse the pun). Of course the ice cream was waffled down and P2 also shared the Crepe Aux Fruits that hubby and I were sharing which was actually delicious and looked so appealing too.

We had a really enjoyable time at Cafe Rouge, the food was well cooked and presented, the staff friendly and accommodating and the kids really enjoyed themselves. I personally felt that the adults menus were really highly priced for what they were but the kids, having three courses and a drink, at £6.95 was definitely excellent value! I will definitely be returning to a Cafe Rouge when I want a really grown up, yet delicious meal for the kids to enjoy without breaking the budget.

I am a member of the Mumsnet Bloggers Network Research Panel, a group of parent bloggers who have volunteered to review products, services, events and brands for Mumsnet. I have not paid for the product or to attend an event. I have editorial control and retain full editorial integrity”.

The kids menu is top nosh. Cooked and presented beautifully.