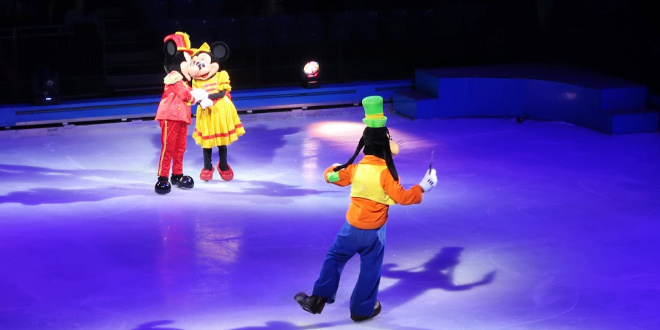 Enjoying The SSE Rewards For Disney On Ice

Fun fact for you, I used to have weekly ice skating lessons and was pretty good at it. Ice skating holds a special place in my heart for many reasons and it’s a sport I really love to watch and participate in when given the chance.

Teaming ice skating with my new obsession of Disney, you can just imagine how excited I was to be given the chance to go and watch Disney On Ice at the SSE Arena Wembley once again. Elsa’s first experience of the show was two years ago, with Eva getting her own dramatic taster back in 2015 and Freya had been a few years before that too. It’s a show that is timeless and I think I’ll always want to go and see it. We bundled all three girls into the car on a cold Sunday morning to head to London for the Disney On Ice show. There are many travel options to pick from when you plan your journey, we had chosen to park in the Red Car Park which is a short walk from the SSE Arena. It literally took five minutes and was past lots of lovely restaurants and a cute undercover playground.

The lovely people at SSE had kindly invited us to come along and experience the SSE Reward benefits. This means we could take the side VIP entrance to enter the venue, a much quieter entrance so perfect if you have autistic children like we do. The SSE Rewards membership is free, you just have to be an SSE customer whether that’s with gas, electricity, boiler breakdown, broadband or phone. The girls were really excited to see Disney On Ice, they’d picked out their favourite costumes. Eva was Rapunzel, Freya was Merida and Elsa, of course, was Elsa. I even put on my Minnie Mouse dress that I bought in Orlando for the occasion.

We got a seat in the Reward Lounge and the girls were given activity packs to keep them occupied. Hubby made use of the free jukebox to play a Frozen song. There’s a bar in the Reward Lounge serving drinks and some light snacks. We had a really pleasant experience in the lounge.

The staff inside the lounge were really attentive. We had an issue with the wristbands being too long, so a staff member with no questions asked went to get scissors to snip them. I watched other guests too and they were being treated the same way, nothing was too big or small of a request. A staff member also got us an extra chair without asking so that Hubby could sit down too. We had been given seating in S10, this area had the perfect side view of the ice rink. The best seats in the house in my opinion. I actually love how the SSE Arena Wembley seating is very staggered, so even with a tall grown-up sitting in front of you, a young child could still see without disruptions. Hubby somehow got persuaded into purchasing a small popcorn that cost £5.

The show was as magical as I expected it to be. I definitely didn’t expect to see Finding Dory featured which was a nice surprise. Disney On Ice 100 Years of Magic runs through quick snippets and scenes from the popular Disney movies. The performers are so talented and there weren’t any slip-ups.

The first part of the show is longer than the second half. The Reward Lounge is open during the interval but I figured by the time we got there, we would have had to come back. It is worth noting that the Reward Lounge has it’s own private toilets too so the queues would be less. By the time I got Eva and her huge Rapunzel dress to the toilet, it was time for the show to continue. Of course, Frozen was our favourite part and I definitely get a bit emotional when you see all the characters come out on the ice for one last time. That sudden realisation that the magic is over and it’s time to enter back into the real world.

We had such a lovely experience at the SSE Arena Wembley for this years Disney On Ice. The Reward Lounge definitely made our experience feel so much more relaxed. Check out our video from the adventure below!

Disclosure: This is a collaborative post. Our tickets and Reward Lounge experience was gifted.
Share
Previous Siblings 2019 – November
Next Make Believe Frozen 2 Workshop In London