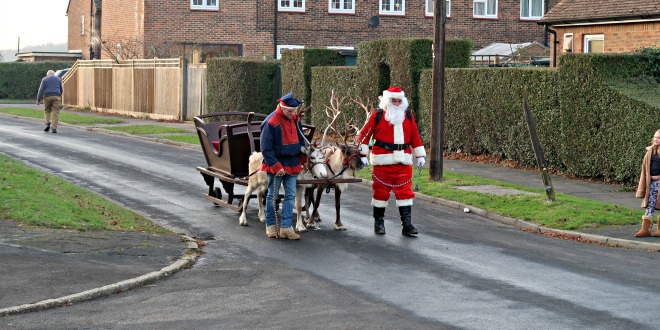 The lead up to Christmas this year has been so incredibly magical already. The girls have been spoilt with different days out, adventures and visits to see Father Christmas. But I don’t think they were quite prepared for when Father Christmas came walking down the road with our Deliveroo order, a sleigh and two reindeers. The girls had seen the big FC coming down the road. I heard them squealing from upstairs and shouting “Santa’s walking down the road”. They definitely were not prepared for him actually knocking on our own door, in the middle of Sevenoaks on a Monday afternoon. Father Christmas told the girls that the elves had been working super hard this year which meant he could take some time off to visit some children this Christmas and help the Deliveroo team with their deliveries. I think the girls were in total amazement seeing two real life reindeers on our drive. They even left a very lovely magical package on our driveway (if you know what I mean). We had a wonderful half an hour with Father Christmas. He let the girls have a quick ride in his sleigh, gave them a couple of gifts and just chatted with them. It was so magical. I understand that he will be making the rounds around the South East so keep an eye out for Father Christmas on your travels and when you order a Deliveroo! I would really appreciate it if you headed over to Twitter to retweet this photo and let others know that Father Christmas is delivering with Deliveroo this Christmas.

I can’t believe it! My @deliveroo was made by Santa! #SantasReal pic.twitter.com/1zIYYWdZrQ