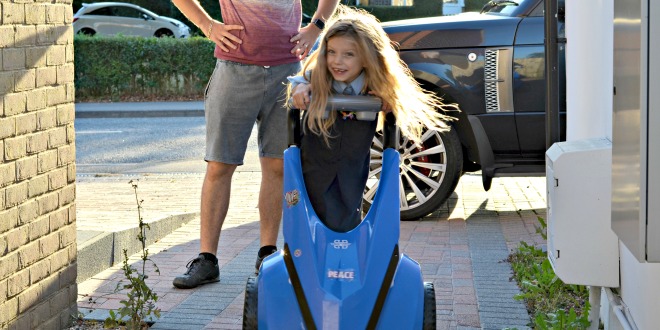 I am going to open this post by saying that my girls are officially spoilt by my blogging life. When I saw the biggest box ever arrive at our door, I knew exactly what it was, the Feber Dareway. The girls saw exactly what it was from the packaging on the side of the box too. It was hard to miss as the box was huge and took up most of our living room.

The Feber Dareway comes in pieces and it has to be built. I thought this was going to be a really difficult task as there was quite a few screws, however it only took about half an hour in the end and the instructions were really easy to follow. The Feber Dareway is an upright ride on suitable for ages six and up until about 40kg. The Dareway uses a 12v battery to operate. This takes 8-10 hours to charge so we put it on overnight ready for use the next day. The charger plugs directly into the base of the Dareway which is accessible under a flap. Then to operate the Dareway there are three buttons; one on the base which is the accelerator, then there is a left and a right button.

Obviously to move forward you press down on the accelerator on the base of the Dareway. You are able to spin in a 360degree by holding down either the left or right button whilst pressing the accelerator with your foot. To go backwards you hold all three buttons at once. The Dareway has two main wheels at the sides with two smaller ones at the front and back. The base is super wide allowing more stability for children. We have found that the Dareway works best on a flat surface. The movements on the Dareway are quite jerky, however the girls absolutely love it! I have never seen P1 laugh so much about something like this. She’s usually very timid and terrified of anything remotely out of her comfort zone. This was just awesome. Seeing P1 and P2 sharing and laughing was just lovely.

I created a little video of the girls on the Dareway to show you. We have already had children running over to ask if they can have a go. I love the Dareway, even though it takes a lot of space up to store and is a little tricky to carry down to the park. It costs around £150 but would be a well received Christmas present or birthday present for any child! A super fun stand up ride on scooter. Easy to assemble and operate.